Earthquakes pose a serious threat to “soft-story” apartment buildings (Figure 1), and by now many owners are aware of this hazard, or of city requirements to strengthen such buildings.

A good way to visualize a soft-story building is to imagine taking an open shoebox and placing it upside down on a table.  The shoebox is fairly sturdy and could support quite a bit of weight. 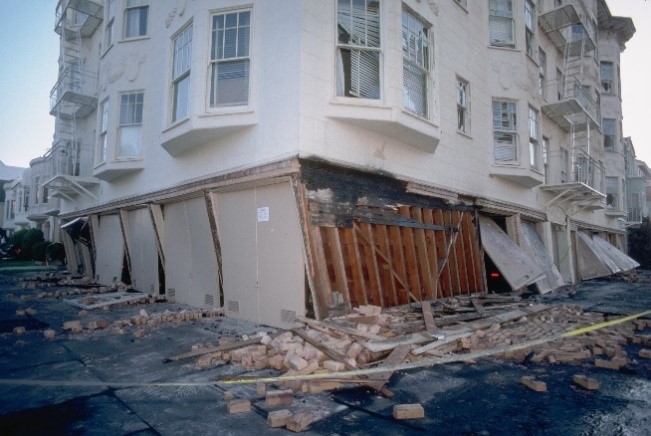 But if you cut out most of one side of the box it becomes much less stable.  If you place two or three more shoeboxes on top of the weakened one, you have modeled a typical soft-story apartment building.  Large openings (such as a garage doors) cause the soft-story weakness by punching huge holes through an otherwise solid wall.  For tuck-under parking, the entire wall is missing on one or more sides.

Strengthening the typical soft story condition requires new structural elements to make up for the solid wall that was removed.  Nobody wants to give up width in a parking space, driveway, or garage door opening, so the new elements need to be as narrow as possible.  This article discusses four varieties of narrow bracing methods:  moment-frames, cantilevered columns, prefabricated bracing panels, and the author’s patented “SkinnyBrace” structural fuse system.

Common Requirements for Any Soft-Story Retrofit

Each of the four above methods require new foundations of some sort, and must connect to the existing structural framing of the floor above the garage/carport/open area at the ground level.  They all function to brace the building against side-to-side forces.  Depending on local requirements, a soft story retrofit may require work in other areas of the building (usually conventional plywood shear walls) that is not described in further detail here.  This other work would be needed no matter which of the four methods you chose to brace the open side of the building.

Building owners may be surprised to learn that an earthquake retrofit system often must be much stronger than needed to resist earthquake forces.  This is because the system must also limit the amount a building sways from side to side (engineers refer to this as “drift”).  Narrow structural elements tend to be very flexible.  Thus, the narrow elements that we want to use in a soft-story retrofit would hardly ever be rigid enough to meet the Code’s drift requirements if designed only to meet the strength requirements.

Moment frames (MFs) have long been considered the “Cadillac” soft story retrofit method—sadly they may not leave room for a Cadillac in a garage.  Typical MFs consist of steel columns placed vertically, one on each side of the wall opening that creates the soft-story weakness.  (If a building has more than one garage, additional columns may be added between garage doors.)  A steel beam connects the tops of the columns.  The joints between the steel members are usually welded together.  Welding requires special inspection by an independent inspection agency (and related fees); it also presents risk of starting fires.  (“Pre-manufactured” MFs are available from several manufacturers, which can eliminate on-site welding.  However, these frames are usually bulkier and more difficult to work with — as one contractor said about them, “They are fine if you don’t mind taking the existing building apart and rebuilding it to fit around them.”)

MFs can be very difficult to fit into existing buildings without moving electrical panels, gas meters, or both (especially in San Francisco or parts of cities like Hermosa/Manhattan/Redondo Beach with narrow lots.)  In many cases the beam going across the top of the door opening will conflict with garage door openers.  In some buildings there is not enough headroom to install the beam; recessing the beam into the ceiling increases costs significantly.

Cantilevered columns (CCs) act like extremely strong and rigid flag-poles that extend from the new foundation to the structural members above the soft story.  Unlike MFs, it is possible to install a single CC on the most convenient side of an opening to provide necessary bracing.  Unfortunately, CCs carry a penalty because they have performed poorly in past earthquakes thus, they are penalized severely and must be designed with a much bigger safety factor compared to other systems.

Most jurisdictions will reduce the required safety factor for CCs if the design meets certain conditions.  Unfortunately, some of these restrictions eliminate the benefits that make CCs appealing in the first place.  For instance, most cities require pairs of cantilevered columns, making it much harder to avoid existing obstructions.  They also require foundations for CCs to be stronger than the CC itself—this seems reasonable until you remember that to meet the drift requirements described earlier, the CC is almost always much stronger than it needs to be.  This translates into foundations that are much larger and more expensive than those for other bracing methods.

Pre-fabricated bracing panels were developed for use in single-family homes, and are not usually strong enough to use in apartment buildings unless they are ganged together.  These panels are usually too wide to consider using next to a garage opening or similar installation where a space is at a premium.  They are made in limited heights intended for new construction, existing buildings often have non-standard ceiling heights, and customizing construction for the “one-size-fits-all” prefabricated panels increases costs and chances for installation problems. 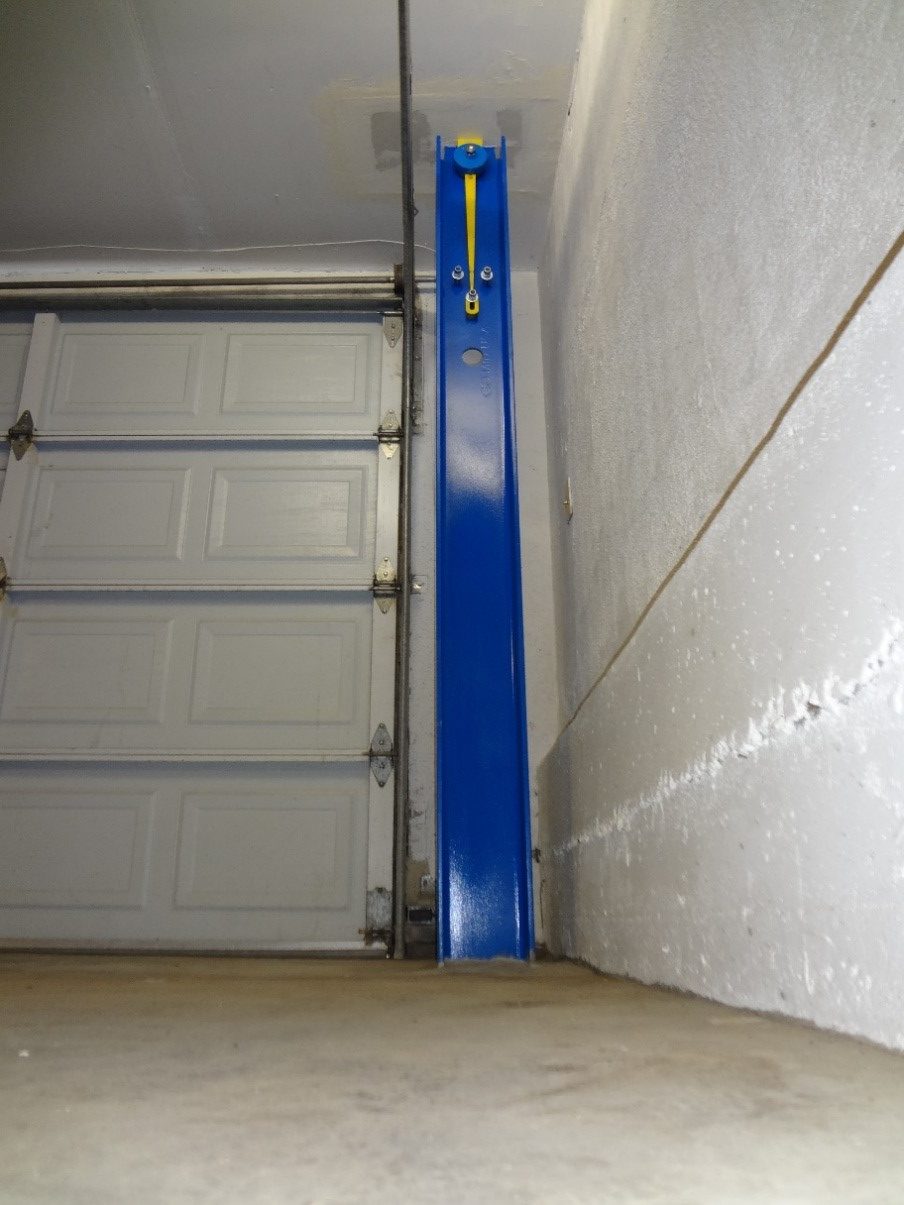 Figure 2. A single SkinnyBrace installed on one side of garage braces the apartment above. The replaceable yellow structural fuses at the top of the column (near and far side) absorb earthquake energy.

The “SkinnyBrace” structural fuse system is the author’s solution that combines several advantages of the other systems (see Figure 2).  The specially-designed structural fuse acts similarly to a fuse in an electrical system:  it absorbs earthquake energy predictably, before other parts of the system are overloaded.  The predictable, efficient energy absorption allows it to meet building code requirements without the large safety factor required for CCs.  Unlike site-built MFs, SkinnyBraces do not require onsite welding.  A single SkinnyBrace is strong enough to brace the open side of a typical 5-unit building.  Finding room for a single SkinnyBrace on one side of a garage or the other is easier than finding room for a MF’s two (or more) columns.  The structural fuses in SkinnyBraces are intended to be easily replaced after an earthquake.  Most other bracing methods are “single-use” items, meaning that you may have to replace the entire MF or CC after an earthquake rather than a pair of structural fuses and a few bolts.

The SkinnyBrace system has been independently evaluated for compliance with building code requirements, and its manufacture follows the same strict quality control standards as other building components such as pre-manufactured moment-frames or pre-fabricated bracing panels.  SkinnyBraces have been installed in over a dozen cities in the Bay Area.

If you need to strengthen a soft-story building, the bracing system you choose can have major impacts on parking and access, as well as overall cost and future repairability.  In another article, I will discuss cost considerations and significant hidden charges that are necessarily outside the scope of contractors’ bids.

Earthquakes don’t have calendars, and they can’t count.  City deadlines may not match when the next earthquake hits, and buildings will shake just as violently whether or not they have the minimum number of units that cities require to be strengthened.  Retrofitting your building before Mother Nature reminds us who is in charge will help protect your investment, your income stream, and your tenants.

Thor Matteson has practiced structural engineering since 1990.  He has designed hundreds of earthquake retrofits.  He wrote two books relating to earthquake retrofits and wood-framed shear walls, and has served on several task forces developing earthquake retrofit standards for FEMA, the City of San Francisco, and the California Earthquake Authority.  Currently, he serves on an International Code Council (ICC) committee that is finalizing ICC 1300, the “Residential Seismic Assessment and Retrofit Standard,” set to be included in the 2023 building code.  Mr. Matteson was frustrated that a better system for bracing soft-story buildings was not available, so he invented his own system, patented it, ran full-scale tests, and had it independently evaluated for building code acceptance.  He founded Quake Brace Mfg. Co. in 2018 to produce the “SkinnyBrace” system.  The system has been permitted and installed in over a dozen Bay Area jurisdictions.  If you have questions regarding soft-story retrofitting, he may be reached at [email protected] or (510) 495-1575.

Category: Magazine ArticlesBy jamil caudangDecember 1, 2022
Tags: RetrofitSkinnyBrace
ARCHIVED ARTICLES
Go to Top
We use cookies on our website to give you the most relevant experience by remembering your preferences and repeat visits. By clicking “Accept”, you consent to the use of ALL the cookies.
Do not sell my personal information.
Cookie settingsACCEPT
Manage consent