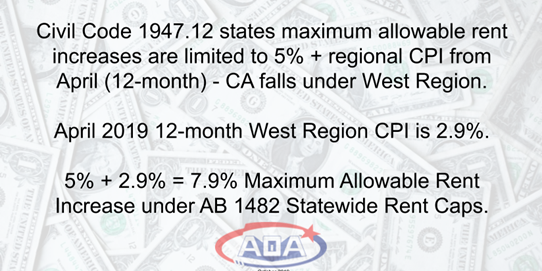 One would think that if it’s the job of an Assemblyman to write a bill that impacts an entire state, then it would be done correctly the first time!  Apparently, Mr. Chiu, the author of “Tenant Welfare” AB 1482, has created a lot of confusion throughout the state by writing one thing into law while meaning another in the case of CPI calculation.

The written law clearly states the CPI should be taken from the “region” where the property is located, when, in fact, he meant the “area”.  Big difference legally! As we expect him to amend this sometime in the near future, until then, it is unclear how to reach the correct figure.

If you go to Assemblyman Chiu’s web site, you will discover that he has been recommending that you use rental increases that are legally against the law as it is written.  Hopefully, no tenant group will file a lawsuit against an AOA member for using the numbers that Chui “intended” to put into his Statewide Tenant Welfare Law 1482 as that could be very costly!

AOA strongly recommends that Mr. Chiu correct his web site and notify the thousands of housing providers, who have been law-abiding citizens, that he has misled them.  I don’t believe our courts will interpret the law according to what Mr. Chiu “intended” to write into the law.  I understand that it’s usually the letter of the law that is used in a court of law according to our courts and the legal profession.  AOA encourages Mr. Chiu to propose an amendment and change the law from how it has been written.  His office has informed AOA that it will take another six months to a year to make the amendments if the rest of the Assembly votes in favor of the change.  Please encourage Mr. Chiu and any other Assembly members that you know to make the change as soon as possible.

From David Chiu’s Official Web site as of December 12th, 2019:   “The applicable CPI is either the regional CPI as published by the U.S. Bureau of Labor Statistics or if there is no regional index available, the California CPI for All Consumers for All Items, as determined by the California Department of Industrial Relations. These numbers can be found on the California Department of Industrial Relations’ website at www.dir.ca.gov/OPRL/CAPriceIndex.htm. The currently applicable CPIs (that is, from April 2018 – April 2019) are as follows:

He states that the applicable CPI is the “REGIONAL” CPI, (which is 2.9%), and then further contradicts himself by separately listing the “AREA” CPIs!  He also states from April to April, but some counties do not produce April figures at all!  The above are Mr. Chiu’s numbers and are believed to be inaccurate!

[NOTE:   The CPI numbers in the chart below were put out by Capitol Advocacy.  They are even different from what Chiu has on his website!]

We have reached out for counsel on this from some much appreciated attorneys.  Here are their thoughts and interpretations of the law:

Attorney Dale Alberstone: AB-1482 has now been codified into law as Civil Code Sections 1946.2 and 1947.12. 1947.12(g)(2) expressly states that the CPI increase to be used is to be determined by the “region” in which the property is located as published by the United States Bureau of Labor Statistics.  All California property is located in the West Region (which is comprised of 8 western states plus Guam).  Whatever Assemblyman Chiu might have intended to say when drafting the Assembly Bill, the Civil Code supersedes and mandates the use of the West Region CPI numbers as a whole, not the numbers of the state of California or any of the specific areas in California, such as Los Angeles, San Francisco, etc.  Therefore, until there is some further official pronouncement by any authorized agency of California or by a California court which changes the legislation, the cautious approach is for AOA members to use the U.S. West Region CPI numbers, not the California CPI numbers (which are promulgated by the Calif. Dept. of Industrial Relations).

Attorney Dennis Block says:  “Percentage change in the cost of living” means the percentage change from April 1 of the prior year to April 1 of the current year in the regional Consumer Price Index for the region where the residential real property is located, as published by the United States Bureau of Labor Statistics. The statute specifically states that the change in CPI is measured by the region where the property is located, not the area or county. As such, the CPI change for the West Region is 2.9%.

Attorney Richard Beckman writes:  Pursuant to the website https://www.bls.gov/charts/consumer-price-index/consumer-price-index-by-region.htm the regional Consumer Price Index for the West region provides an annual CPI increase of 2.9%. [Note:  Regarding the CPI calculation- based on AOA’s research, the author of the legislation, Assemblyman David Chiu, indicates that the provision regarding the applicable measure of the CPI increase is being misinterpreted, in that Chiu says he meant “areas” and not “region.” Chiu has indicated an intention to seek to amend the bill so that the CPI will match specific “areas” and not the Western Region. However, until such time as the statute is clarified by amendment or court interpretation, AOA recommends applying the CPI provision as the law actually states – by the region.]

Attorney Grayce Long writes:   AB 1482 places a limit on how much rent can be increased in a year and places certain restrictions on tenant evictions.   Annual rent increases are limited to a 5% annual increase plus CPI index increase for the county where the property is located with the combined total not exceeding 10% per year.  The CPI can vary from region to region – in Los Angeles and Orange counties the CPI increase is 3.3, whereas in San Bernardino County it is 2.8.  There is definitely confusion on this issue as to the way Chiu wrote the law however, I believe the intent of the drafting of the bill was meant to increase by the CPI for each county.

Attorney Franco Simone writes: The AOA staff reached out to Assemblyman David Chiu’s office for clarification (Mr. Chiu sponsored the AB 1482 bill).  Contrary to the text of AB 1482, Mr. Chiu’s office represented that AB 1482 was meant to refer to “area” and not “region” and that he will likely seek to amend AB 1482 to reflect that the CPI match specific “areas” instead of the Western Region.  We will notify our readers when Mr. Chiu submits such an amendment.  Until then, we recommend that you use the lesser of the two figures until this matter is resolved.

Attorney Michael Brennan says:  Landlords beware! AB 1482, as written, is riddled with problems, mistakes, and confusion. There are contradictory provisions, references to sections that do not exist, and mistakes written into it by its own author, Assemblyman David Chiu. For example, there is significant confusion amongst industry professionals as to the proper CPI index to be used when calculating rental increases. While Assemblyman Chiu’s office has stated his intention was to use the words “area index” rather than “regional” for the proper CPI index to be used, the law as written contradicts his “stated intentions”, and increasing the rent based on his “intentions” rather than the final written version of the law has the potential to render every increase given thereafter illegal. Can you imagine the ramifications of that mistake ten or twenty years from now when a landlord attempts to evict a tenant for non-payment of rent, only to have the tenant’s attorney raise the fact that a rent increase given 10 or twenty years ago that was contrary to the written law not only renders the 3-day pay or quit notice overstated and defective, but now results in tens of thousands of dollars owed to the tenant as a “rent credit”? For the time being, the prudent move seems to be to use the lesser CPI amount until such time as Assemblyman Chiu rewrites the law to accurately reflect his stated intentions.

Attorney Ted Smith writes:  AB 1482 prescribes the use of the CPI for the “region” where the property is located as published by the U.S. Bureau of Labor Statistics.  However, the only “regional” number it publishes is for the “West Region” which covers the 13 westernmost states. We presume here that the use of the word “region” in AB 1482 refers to the Bureau’s “area indexes”.

Attorney Gary Ganchrow says:  People should be aware that from a legal perspective in California, a court interpreting statutory language will effectuate a law’s purpose by ascertaining the Legislature’s intent based on the actual words of the statute.   Therefore, the clear language of the statute will govern, not what Mr. Chiu may have intended separate and apart from the statute’s actual language.

Attorney Rachael Callahan writes: AB 1482 verses what will/has ended up in the actual law is quite different.  The actual law only says CPI without explaining how to calculate that amount. I’ve consistently advised my clients to act conservatively, and will continue to do so.  Right now the range is between 1.7% and 3.3% plus the 5% specified allowable increase.  If you want to be safe, only increase by 5%.  If you want to be conservative, but go beyond the 5%, then I would recommend 7% total.  You should always look from the perspective of what you can reasonably defend, and through the lens of a very tenant-friendly State of California and County of San Diego.

Along with the CPI confusion, Chiu has also revealed an oversight in 1482 whereas he exempted Section 8 from both the just-cause eviction and the rent control provisions.  Apparently, exempting Section 8 tenants was not his intent and we’ve been told he plans to amend that part of the Bill sometime during 2020.

Note from AOA:  If you have already raised your rents according to the way the law was written using the 5% plus the 2.9% for the region, (a total of 7.9%) you may be able to give an additional increase if you decide to use Mr. Chiu’s numbers or if the law is changed.  We will keep you posted as information is passed our way.

Category: Current EventsBy CrisDecember 13, 2019
Tags: CPIRent Controltenant welfare
ARCHIVED ARTICLES
Go to Top
We use cookies on our website to give you the most relevant experience by remembering your preferences and repeat visits. By clicking “Accept”, you consent to the use of ALL the cookies.
Do not sell my personal information.
Cookie settingsACCEPT
Manage consent