To coin an old phrase, the country has “gone ape” in the wake of Donald Trump’s surprise election as the 45th President of the United States. The stock markets have skyrocketed to new record highs day after day [shortly after his election]. Consumer confidence has soared to the highest level since 2008.

For reasons that are not entirely clear, Americans are becoming much more optimistic about the economy for 2017 and beyond. Among Republicans, optimism about the economy has more than quintupled since before the election. Among Independents, optimism has more than doubled since October. This newfound optimism is not shared across the board, of course. Democrats have seen their economic optimism diminish by more than half since the election as we’ll see below. Despite that, most economic forecasts are on the rise of late.

Consumer Confidence Soars to Highest Since 2008

The U.S. Consumer Confidence Index has been soaring since the end of the Great Recession, and it hit another recent new high last month. The Conference Board reported Friday that its Consumer Confidence Index rose to a surprising 107.1 in November, versus the pre-report consensus of 101.1, the highest reading since 2008 (see chart below). Here’s an excerpt from the Conference Board’s press release last Friday: “Consumer confidence improved in November after a moderate decline in October, and is once again at pre-recession levels. A more favorable assessment of current conditions coupled with a more optimistic short-term outlook helped boost confidence. 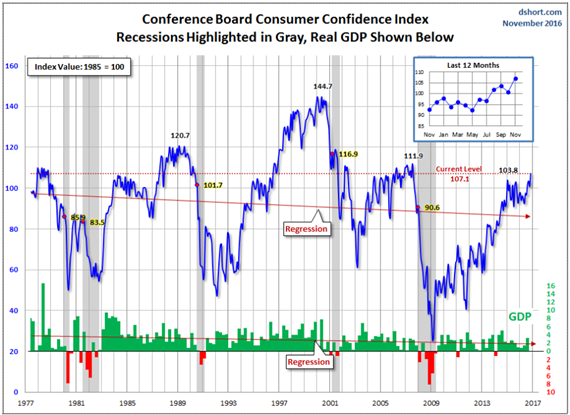 Whether you voted for Donald Trump or not, and whether you support him or not, a growing number of Americans are becoming confident that his proposed policies of lower income taxes for individuals and corporations, reduced regulations and renegotiated trade deals will be very positive for the US economy.

Consumer spending accounts for almost 70% of US Gross Domestic Product, and the Consumer Confidence Index (CCI) is our best indicator of consumers’ willingness to open their wallets and stimulate the economy. Based on the latest reading in the CCI, we would expect a significant boost in consumer spending this holiday season. That remains to be seen, of course.

While President Trump can repeal some of Obama’s onerous regulations by Executive Order very quickly, it could be at least a year or more before he gets his major economic policies and tax cuts through Congress. While it may be reasonable to assume that he will get his proposed tax cuts and new budget approved by a Republican-controlled Congress that will take some time, and even more time to show up in the economy.

On the other hand, the Commerce Department reported that 3Q GDP rose by 3.2% in the third quarter as reported on November 29. That surprising estimate will be revised again on December 22. But if the next GDP estimate confirms that GDP growth is above 3%, we will need to upgrade our outlook for the US economy going forward.

My Theory on Why Consumer Confidence is Rising Rapidly

But what we got from him was a very liberal ideology of bigger government, higher taxes and more onerous government regulation. He had a legitimate chance to win over the country, but he failed miserably. This explains why Republicans won decisive victories in Congress, state governorships and state legislatures during Obama’s eight years in office.

I think this also explains why Donald Trump won a decisive Electoral College victory over Hillary Clinton, which no one in the media expected. Americans wanted real change and they voted accordingly, for better or worse.

Let me be clear, I have not been a big Trump supporter. But I also am not a Trump detractor. I welcome many of his ideas. I think there’s a chance that he will be a much better president than the media suggests. That, too, remains to be seen of course. This is why I believe that consumer confidence is rising rapidly. Americans increasingly believe that whatever change Trump is espousing will be better than what we had with Obama, and what we would have gotten with Hillary. That’s my theory.

Bottom line: I think it’s too early to decide on a Trump presidency, one way or the other. Yet Americans are jumping on the bandwagon in increasing numbers. We’ll see how that turns out in the next few years.

Agree or not, the election of Donald Trump has brought with it a surge in optimism in the United States over the economy and the stock markets not seen in years.

The CNBC All-America Economic Survey for the 4Q found that the percentage of Americans who believe the economy will get better in the next year jumped an unprecedented 17 points to 42%, compared with just 25% before the election. It’s the highest level since President Barack Obama was first elected in 2008.

The surge was powered by Republicans and Independents reversing their outlooks. Republicans swung from deeply pessimistic in October, with just 15% saying the economy would improve in the next year, to strongly optimistic with 74% believing in an economic upswing in December. Optimism among Independents doubled, but it fell by more than half for Democrats. Just 16% of Dems think the economy will improve going forward, down from 39% before the election.

The CNBC survey conducted on December 2-5 asked a number of other questions. For example, a majority of Americans surveyed told CNBC that they are “comfortable and prepared to support” Trump’s presidency. Some 56% of respondents now back the President-elect, up from only 43% who were asked the same question just before the election. Even 23% of Democrats said they now support President-elect Trump.

The survey showed a rise in optimism when it comes to several key economic gauges. A majority of Americans now look for higher wage gains in the next year and bigger increases in their home prices.

More Americans Are Optimistic About Their Investments

The post-election surge in the major stock market indexes also has buoyed feelings about equities with 40% saying now is a good time to invest, up 10 points from before the election. Here again, Democrats became somewhat more negative on stocks while Republicans grew significantly more optimistic.

Those differences are also clear in the choice for what Americans believe are the best investments right now. While real estate remains the top choice for the third straight year, stocks gained the most ground at the expense of gold, real estate and Treasuries. For now, the shine is off of gold for Republicans and they, along with Independents, have grown more favorable toward equities.

Nearly every demographic, except the poor and Democrats, now has a net positive view about investing in stocks. I guess that’s not surprising given that the Dow and the S&P 500 have made 15 new record highs since the election – and are on-track for another one today.

The December CNBC survey also asked other questions of its audience. Asked which of several priorities President Trump should focus on first, a 40% plurality selected “Keeping U.S. jobs from going overseas.” All the other choices were well behind this one.

Category: UncategorizedBy AOA EditorApril 1, 2017
Go to Top
We use cookies on our website to give you the most relevant experience by remembering your preferences and repeat visits. By clicking “Accept”, you consent to the use of ALL the cookies.
Do not sell my personal information.
Cookie settingsACCEPT
Manage consent