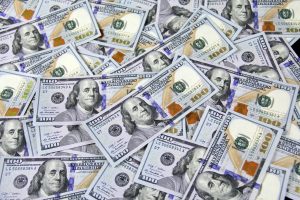 The economy’s weak summer performance reflected a big slowdown in consumer spending as a spike in COVID-19 cases from the delta variant caused consumers to grow more cautious, and snarled supply chains made items such as new cars hard to get and also contributed to a burst of inflation to levels not seen in three decades.

While COVID cases in recent weeks have started to rise again in many parts of the country, economists do not think the latest increase will be enough to dampen consumer spending significantly, which accounts for 70% of economic activity.

The expectation is that the economy in the current October-December quarter could grow at the strongest pace this year, with some economists forecasting GDP could surge to an 8% rate in the fourth quarter. Most forecasters I read, however, expect GDP to grow by more like 5% for the fourth quarter.

For the whole year, this same group of forecasters expects GDP to have grown around 5.5%, which would be the best showing since 1984 and a big improvement from last year when the economy shrank by 3.4%. But keep in mind this strong economy is largely the result of the nation rebounding from the pandemic recession.

And it remains to be seen how the supply chain disruptions will play out going forward. Will they get worked out relatively soon? Or will they get worse before they get better? Most forecasters are betting on the former, but we’ll have to see as we move into the New Year. Let’s hope the latest move to new record highs in the stock markets is a sign they’re right.

U.S. consumer spending increased more than expected in October as households bought motor vehicles and a range of other goods, showing no signs yet of holding back because of high inflation, and boosting the economic outlook early in the fourth quarter.

The Commerce Department reported at the end of November that consumer spending, which accounts for more than two-thirds of U.S. economic activity, jumped 1.3% last month after rising 0.6% in September. Spending was partially boosted by higher prices due to inflation alone, and because demand continues to outpace supply.

Consumer spending is accelerating after slowing sharply in the third quarter as COVID-19 infections driven by the Delta variant flared up and shortages of goods became more widespread. Fears of empty shelves and paying even more later on for scarce goods have encouraged Americans to start their holiday shopping early.

Retailers expect holiday sales will be the best in years this season, but some economists are cautioning about downside risks to the rosy forecast. Coronavirus infections are rising again, which could prompt some consumers to cut back spending on travel and entertainment, including dining out. But as noted above, most forecasters don’t see this as a big risk to the overall economy.

Still, there are other potential problems we need to keep an eye on. Continued clogged supply chains and port delays could lead to product scarcities on shelves as dozens of cargo ships remain anchored offshore waiting to be unloaded at the large ports in Southern California.

Meanwhile, prices for consumer goods continue to hit new highs. The Consumer Price Index rose at a 6.2% annual rate in October, the fastest pace in more than 30 years. Core inflation, which strips out food and energy, increased 4.6% last month, the fastest gain since August 1991. Energy, shelter and vehicle costs led the gains, which more than wiped out the wage increases workers received for the month.

While there are risks to the outlook including the factors which slowed growth from 6+% in the first half of this year to 2.1% in the third quarter, most forecasters still believe the economy will strengthen to around 5% or better in the fourth quarter and continue at 5.5% or so in 2022.

The House narrowly passed the centerpiece of President Biden’s domestic agenda on Friday, approving $2.2 trillion in spending over the next decade to battle climate change, expand health care and reweave the nation’s social safety net, over the unanimous opposition of Republicans.

The bill’s passage, in a 220 to 213 vote, came after weeks of cajoling, arm-twisting and legislative horse trading by Democrats. It was capped off by an exhausting and record-breaking speech of more than eight hours by the House Republican leader, Rep. Kevin McCarthy of California, which pushed a planned vote past midnight, then delayed it to a Friday morning – but did not dent Democratic unity.

* President Biden’s average approval rating has fallen below 42% since this poll was taken. ABC News/Washington Post and Gallup have him all the way down to 38, a new low in the latest week.

The so-called “Build Back Better” bill still has a long and difficult road ahead. Democratic leaders must coax it through the 50-50 Senate and navigate a tortuous budget process that is almost certain to reshape the measure and force it back to the House – if it passes at all.

But even pared back from the original $3.5 trillion plan that Mr. Biden initially sought to $2.2 trillion, the Democrats promised it could prove as transformative as any social legislation since the Great Society and War on Poverty in the 1960s, especially for young families and older Americans. That remains to be seen, of course.

The Congressional Budget Office published an official cost estimate in November that found the package would increase the federal budget deficit by $160 billion or more over 10 years. How much more will depend on the IRS’ success in ratcheting up its tax collection efforts and bringing in tens of billions more from taxpayers each year going forward. That also remains to be seen.

Republicans, who have railed for months against the measure as a costly initiative that would steer the nation toward socialism, wasted little time in promising to try to weaponize it against Democrats in next year’s midterm elections.

“This bill would worsen inflation by pumping trillions of dollars in wasteful spending into the economy, give tax cuts to the wealthy, hike taxes on middle-class families and add hundreds of billions to the national debt,” Ronna McDaniel, the Republican National Committee chairwoman, said in a statement that derided the bill.

The bill offers universal prekindergarten, generous subsidies for childcare that extend well into the middle class, expanded financial aid for college, hundreds of billions of dollars in housing support, home and community care for older Americans, a new hearing benefit for Medicare and price controls for prescription drugs.

More than half a trillion dollars would go toward shifting the U.S. economy away from fossil fuels to renewable energy and electric cars, the largest investment of its kind ever – which Democrats promise will slow global warming (of course, with no proof of that).

The Biden administration promises the package would be paid for with tax increases on high income earners and corporations, estimated to bring in nearly $1.5 trillion over 10 years. But the nonpartisan Congressional Budget Office warns there may have to be tax increases on a much larger swath of Americans to pay for this enormous spending bill, or else it will add tens of billions to the budget deficit. Of course, the Democrats don’t care about that.

From the beginning, Republicans – who made it clear they could never support a package of the scope and ambition Mr. Biden proposed – were cut out of the talks. While some Republicans voted for President Biden’s latest infrastructure bill, they unanimously opposed the Build Back Better social safety net package, arguing it would constitute a dangerous encroachment of the federal government into every aspect of American life, and would exacerbate rising costs across the country.

A spokeswoman for the Republicans’ House campaign arm said Democrats “seem intent on destroying our economy before they lose the majority.” And in the Senate, party leaders were openly pressuring Democratic senators to tank their party’s marquee legislation. But the Dems passed it anyway. Now we’ll see what happens in the Senate. It should be interesting, with the Dem’s majority only a razor-thin one vote. They can’t afford to lose anyone. We’ll see how it goes just ahead.

Category: EconomyBy AOA EditorJanuary 1, 2022
Tags: economyGary D. HalbertInflation
ARCHIVED ARTICLES
Go to Top
We use cookies on our website to give you the most relevant experience by remembering your preferences and repeat visits. By clicking “Accept”, you consent to the use of ALL the cookies.
Do not sell my personal information.
Cookie settingsACCEPT
Manage consent