It happens – you get a losing hand in poker, you pick the slow line at the checkout, you pick a bad tenant. It’s a matter of the numbers, in my case, more tenants equal more numbers and more chances for something to go off the rails, but the important part is you have to deal with the repercussions and move forward.

The image above is an example of a repercussion that I found upon arriving at one of my weekly furnished rental properties and is an example of what can happen when you’re dealing with a bad tenant. Etched on the top of my wooden coffee table were the words “Bill is a slumlord“. Just out of the picture is some additional graphic art including a swear word and random drawings. It was left by a tenant who had pushed my buttons too far and I evicted.

So I searched for the lesson from this, and initially there was none – just frustration, disappointment and anger. Did I mention it wasn’t a good day to talk to me?

Part of the reason I evicted the tenant was that he was continually late with rent; another was he was apparently incredibly messy and with this house being a shared accommodation, everyone has to clean up after themselves or it all falls apart. When one person doesn’t clean up, it deteriorates quickly. I’d left notes explaining things had to change, but they hadn’t.

I asked everyone who they believed the culprit was, but apparently there is honor among tenants and no one would point a finger, until a few days before I told this guy when his last day would be. One of the new guys said he was tired of the mess and confirmed my suspicions.

So anyway, I was to meet the departing tenant yesterday at noon, but instead  found the front handle on my door was broken off, my front light outside light cover taken off and smashed on the front sidewalk, a general mess of spills on the laminate floor in his room and of course, the lovely etching. What a lovely fellow.

In the big picture, it’s not a huge dollar expense, but it’s the time and energy to fix it that gets disappointing. But what hurt the most at the time was the frustration that he felt I was a slumlord.

Here’s a picture of the room normally, does it look like a slum to you? 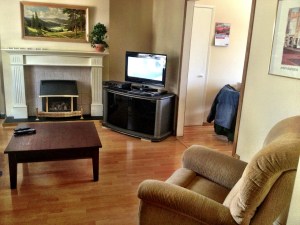 With furnished rentals, it’s important to keep them filled, so my wife and I returned today to get everything cleaned up, to take the coffee table away to see if we could repair it and to get things back to clean. After a couple hours of cleaning, it’s like a new place! Not back to where it was before this fellow moved in, but far closer. And it was also where the lessons started showing up.

When we arrived, the table was still etched and the fellow’s room was still a mess, but the kitchen counters and kitchen table were all clean, neat and tidy. One or more of the other tenants had stepped up and cleaned up … partially, at least.

Since I had a very good idea who it was that had done most of it, I texted the other tenant before I left just to inquire who had been cleaning and he admitted that he was tired of the mess. When I informed him we had spent the last several hours cleaning, floors, walls, taking garbage out and doing dishes, he was extremely appreciative and that was the important lesson!

Where we had one tenant who was so bitter and angry he defaced my property, I had another that was thankful for what I offered and for stepping up and those are the tenants we, as landlords, need to find and work towards keeping happy.

Having had over 1,000 tenants over the last ten plus years it’s amazing how many of the bad tenants seem to stand out, yet they made up such a small portion of the big picture. Yet of all the tenants I have had been through, 90% have been good and 5% I dare say were simply awesome.

We Need to Focus More on the Awesome

We can’t let the bad experiences rule our lives. If you’ve had a bad tenant you know it can be a slap in the face and it causes many landlords to give up, to walk away from the business, their dreams and their original plans. We, YOU, can’t let that happen and when you have bad experiences chalk it up as a learning lesson.

Take something from your experience and see how you can apply it to future tenants or future interactions. For me, I’m not sure what or how I could have dealt differently with the tenant at this point, but I could have made the other tenants happier sooner by acting earlier. I have to chalk part of this up to some bad apple, but I know I’ve had so many great apples the positive has to outweigh the negative.

Bill Biko has become “the Educated Landlord” through both training and the school of life. With almost a decades experience of land lording Bill’s been mentoring and assisting landlords for the last five years and you can find more of his tips and articles to make your life as a landlord easier, more profitable and less stressful at www.TheEducatedLandlord.com.

Category: UncategorizedBy AOA EditorMay 1, 2017
Go to Top
We use cookies on our website to give you the most relevant experience by remembering your preferences and repeat visits. By clicking “Accept”, you consent to the use of ALL the cookies.
Do not sell my personal information.
Cookie settingsACCEPT
Manage consent