Do The Rich & Corporations Pay “Fair Share” of Taxes? By Gary Halbert

For as long as I can remember, the mainstream media has claimed that wealthy Americans and corporations don’t pay their “fair share” of taxes. You’ve heard this, of course, as well. But is it really true? Let’s take a look.

Since progressives believe that the wealthy and corporations do not pay their fair share of taxes, they always argue that taxes should be raised on these upper income people and companies. But do they have their facts right? We’ll see as we go along. Let’s start with some facts.

A recent Internal Revenue Service (IRS) survey found that 95% of Americans believe it is everyone’s civic duty to pay their fair share of taxes. They also believe the current system is unfair, largely benefitting big business and rich people. 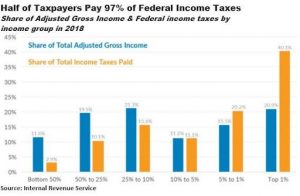 But what about tax loopholes and the fact that many big companies do not pay corporate federal taxes? The truth is the current tax code allows carryforward losses, tax credits for investments in research and development (R&D), investment in equipment and machinery and stock-based employee compensation.

However, these constitute legal tax avoidance — not tax evasion. There’s a huge difference.

Rarely do people complain about tax loopholes they enjoy — for instance, deductions for business expenses, medical expenses, charity, child tax credit, mortgage interest and refundable tax credits. All have broad political support. Let’s remember too that most interest paid on state and local government bonds is tax-exempt — a boon to cash-strapped governments in those jurisdictions.

As we all know, President Biden and the Democrats in Congress want to raise corporate and individual tax rates this year. If the House Ways and Means Committee has its way, combined federal and state corporate tax rates would be close to 31%, up from 21% currently in most states — making the US the third-highest among developed countries. For individuals, House Democrats propose a top tax rate of 39.6%, up from 37% currently.

But if the Dems are successful in getting these tax increases passed, does anyone think the federal government will spend the money captured from tax increases to pay down the national debt or boost the nation’s economic competitiveness? One need only examine the unbroken record of waste, fraud and abuse (and sadly this goes for both political parties).

Citizens Against Government Waste, a nonprofit think tank, annually produces a “hall-of-shame” list of wasteful federal spending. The US House has posted online more than 3,300 earmarks (spending appropriations) by 324 members of Congress of both parties in the proposed 2022 federal budget. Much of this is blatant pork-barrel spending.

The American tax system is inarguably flawed. But the first step in reforming it is to understand who’s really paying their fair share and how much of the tax revenue is being wasted. The truth is US corporations are paying at least their fair share of federal taxes, and the wealthiest 1% are paying over one-third of all income taxes.

It remains to be seen if President Biden and the Democrats will get their big tax increases passed or not. No Republicans will vote for them, so they have to get nearly all House Democrats to vote in favor. Yet they know tax increases are not popular, and with so many up for re-election in 2022, there may be a good chance they won’t happen.  Let’s hope so, anyway!

Categories: Magazine Articles, Politics, TaxBy AOA EditorDecember 1, 2021
Tags: Gary Halberttaxes
ARCHIVED ARTICLES
Go to Top
We use cookies on our website to give you the most relevant experience by remembering your preferences and repeat visits. By clicking “Accept”, you consent to the use of ALL the cookies.
Do not sell my personal information.
Cookie settingsACCEPT
Manage consent