Forecast for the Economy – By Gary Halbert

The Fed Open Market Committee (FOMC) met to review monetary policy and its massive “quantitative easing” effort. The official policy statement released at the end of the meeting was little changed from those in previous months.

The FOMC voted to continue the monthly QE purchases of $40 billion in mortgages and $45 billion in Treasury bonds until the economy gets stronger. The statement also repeated that these unprecedented purchases would continue until the unemployment rate falls to 6½%, suggesting that QE would most likely continue at least through 2014, assuming inflation remains low. As expected, stocks rallied on the news.

But then at the press conference after the meeting and the release of the policy statement, Fed Chairman Bernanke delivered a “curve ball” that hasn’t gotten much coverage in the media. He announced that the Fed will adjust the amount of monthly bond purchases according to how it sees economic conditions.

In other words, if the FOMC views that the economy is continuing to improve with stronger payrolls and lower unemployment – not necessarily 6½% – that could  lead to a decline in Fed bond buying, from $85 billion a month to something lower, so long as the economy keeps looking better.

So while Bernanke suggested that the Fed Funds Rate will remain near zero indefinitely, the size of the monthly mortgage/bond purchases could come down much sooner if the economy is viewed as improving by the FOMC – perhaps as early as the second half of this year.

And it’s worth noting that a mild economic upturn may be in the cards, perhaps driving GDP above 2% by the end of the year. Lower jobless claims, stronger housing numbers and a rebound in the index of leading indicators recently point to at least a mildly improving trend in the months ahead, barring any surprises.

I don’t know for sure how the equity markets will react if the Fed announces it is reducing its monthly QE purchases; it certainly will depend on how much and how fast. But as for me, I welcome the news.

The question remains as to whether the Fed will actually sell any of its massive securities holdings which will top $4 trillion by the end of this year. I have not found anything that indicates the Fed is obligated to sell these securities before maturity. If you have seen anything to the contrary, please send it along.

Fed Lowers Forecast for the Economy

The Fed’s latest economic forecast doesn’t see the unemployment rate falling to 6.5% until sometime in early 2015. Maybe this explains why Bernanke changed his position on when the Fed would start reducing its bond buying spree.

Economy May Be Gaining Momentum

As of this writing, we have not yet received the third and final estimate of fourth quarter GDP. You will recall that in late January, the Commerce Department reported that fourth quarter GDP actually declined by 0.1% (annual rate). Then in late February, it revised that number up to a positive 0.1%. The consensus is that the next report will be revised again to +0.3%.

If the next GDP report comes in at 0.3%, that will mean the economy grew at an annual rate of only 1.68% last year. If so, that would be the worst year since 2001 when GDP rose only 1.1%. However, there is growing evidence that GDP growth in 2013 will be better. A growing number of forecasters are predicting that we could see 3% growth for all of this year.

I’m not that optimistic yet, nor is the Fed, as noted above, but there are some signs of improvement in the economy, especially in the housing market. Housing starts were released and confirmed that the trend in housing is still upward. Single-family housing starts rose to a 618,000-unit pace, the fastest rate since June 2008, with multifamily starts also rising for the month. Forward-looking building permits are now up over 30% on a year-ago basis.

Existing home sales rose to a 4.98 million-unit pace in February, which is quickly approaching its long-run trend. The share of distressed sales fell to 25% in February, down from 34% in 2012. New home sales fell modestly, down 1.6% last month, to a 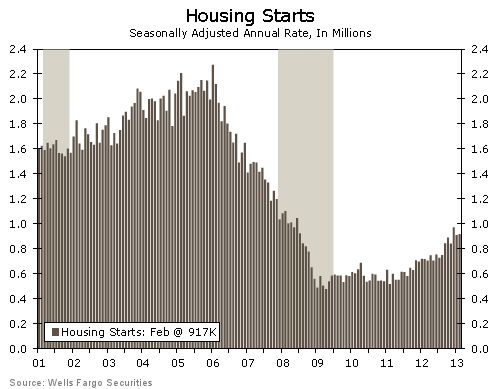 Despite the dip in sales, the median sales price for new homes surged 8% in February to $233,700. Part of the reason for the price increase is the fact that only 150,000 new homes were for sale in January and February – the lowest on record dating back to 1963. The supply of new homes on the market has consistently fallen over the past two years.

The share of “under water” homeowners (with mortgages exceeding the value of their homes) has dropped from 21.2% in mid-2009 to 14.8% in the third quarter of 2012, according to Moody’s Analytics. The number of US homes repossessed by lenders last month fell 11% from January and declined 29% from February last year, tumbling to the lowest level since September 2007, according to RealtyTrac.

According to the National Bureau of Economic Research (the group of academic economists who set dates for the beginning and end of business cycles), theUSeconomy has been in a recovery since mid-2009. That’s when the recession that began in late 2007 is deemed to have ended. But for many Americans, if not most, it hasn’t felt like a “recovery.”

Overall GDP has surpassed its pre-recession peak in 2007, but by only a meager 2.5%. Although 5.7 million payroll jobs have been created from the low point in 2009, we lost 8.9 million jobs in the recession, so total employment remains 3.2 million short of its pre-recession level. Steep unemployment (7.7 percent in February) has kept the share of workers jobless for six months or more stubbornly high at 40% of total unemployed.

Although the economy satisfies the technical criteria for “recovery,” it feels like it’s still stuck in recession territory. A new PewResearchCenterpoll on the economy found that 33% of respondents report “hearing mostly bad news,” with only 7% “hearing mostly good news” and 58% acknowledging a mix.

Economic writer Robert Samuelson (syndicated by The Washington Post) may have said it best: “It’s a ‘recovery’ but it’s not; the ‘recession’ is over but it isn’t.