These numbers are deeply disturbing to most [people who believe in our old American economic system of free enterprise.] The reasons should be obvious, and the trends are not in our favor.

Today we look at a PewResearchCentersurvey that polled Americans for their feelings about capitalism versus socialism. The survey included all races, different ages and various income groups. I think it’s safe to say, this survey will SHOCK YOU!

Since the re-election of President Obama by a comfortable margin, a great deal of energy has been focused on the changing American electorate and the role of minorities in particular. So much so that aPewResearchCentersurvey from late last year has resurfaced and is getting a lot of attention.

Pew asked Americans of all races and various age groups to give their views (positive or negative) on Capitalism and Socialism. Let me warn you in advance: The survey results shown in the table below may shock you. Take a few minutes to let the data shown below soak in. 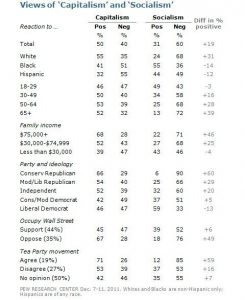 These numbers are deeply disturbing to most [people who believe in our old American economic system of free enterprise.] The reasons should be obvious, and the trends are not in our favor.

As for the fiscal cliff battle, virtually everyone believes it was a big win for President Obama. He succeeded in getting almost everything he wanted, and did so without any spending cuts. Most conservatives believe the bill that just passed in Congress is a disaster and are angry that more Republicans didn’t vote against it. Count me as one of them!

Let’s take a look at the highlights (or lowlights) of the bill that passed in both houses of Congress on Tuesday.

What you may not have heard is that the Senate snuck in tens of billions in new pork barrel spending in what was intended to be a bill that only dealt with the tax code. An estimated $75 billion in “earmarks” were deceptively hidden in the 157-page bill. The House approved it, too.

So, President Obama came out the big winner on this one. Round Two will unfold later this month most likely and will include battles over the Sequester noted just above and the next debt ceiling battle. Only this time, the Debt Ceiling battle will be very different.

Treasury Secretary Geithner announced that theUSwould officially reach the statutory debt limit of $16.4 trillion on December 31, but added that the government could employ “extraordinary measures” to keep paying its bills for a couple more months.

At the same time, President Obama let it be known that he will push for the abolishment of the debt ceiling altogether. He no longer wants any congressional limit on how much the government can spend. He wanted it eliminated in the fiscal cliff bill, but due to strong opposition, he had to back off. He will go for it again in the debt ceiling battle in February.

If you watched the movie “2016: Obama’s America” (as I repeatedly urged my readers to do), you know exactly why Obama wants the debt ceiling abolished. If you didn’t watch 2016, I again urge you to rent it – especially if you are an Obama supporter. Trust me, watch it.

Another gut-wrenching political battle is sure to ensue, much as we saw in 2011 when we last hit the debt ceiling. That battle pushed theUSdangerously close to defaulting on its debt and, as you will recall, resulted in the first credit rating downgrade in the history of our nation.

This time, the battle will be even more intense, especially if Obama pushes for the elimination of the debt ceiling altogether. And I think he will. I hope I am wrong.

The argument will once again boil down to the Republicans fighting hard for spending cuts in exchange for raising the debt ceiling. President Obama will fight the spending cuts tooth-and-nail. We could once again see the USon the verge of default. Moody’s warnsthat our credit rating could fall yet again. Stocks will plunge… again, only to rebound if an 11th-hour deal is finally struck.

That assumes, of course, that Obama is not successful in eliminating the debt ceiling. If somehow he gets his wish that the debt ceiling is abolished, all hell could break loose in the financial markets. Foreign buyers of our Treasury securities could revolt! Watch the movie.