There is a clear seasonal pattern for house prices, and earlier this year I predicted that the Case-Shiller indexes would turn negative month-to-month in October 2012 on a Not Seasonally Adjusted (NSA) basis.  That is the normal seasonal pattern.
Also I expected smaller month-to-month declines this winter than for the same months last year. Sure enough, Case-Shiller reported that the Composite 20 index NSA declined slightly in October 2012, and also declined slightly again in November 2012 (a 0.1% decline).  In November 2011, the index declined 1.3% on a month-to-month basis, so this is a significant change.

This graph shows the month-to-month change in the CoreLogic and NSA Case-Shiller Composite 20 index over the last several years (both through November). The CoreLogic index turned negative month-to-month in the September report, and then turned slightly positive in November (CoreLogic is a three month weighted average, with the most recent month weighted the most). Case-Shiller NSA turned negative month-to-month in the October report (also a three month average, but not weighted), but was only slightly negative in November.
For November, Case-Shiller reported the sixth consecutive year-over-year (YoY) gain in their house price indexes since 2010 – and the increase back in 2010 was related to the housing tax credit. Excluding the tax credit, the previous YoY increase was back in 2006. The YoY increase in November suggests that house prices probably bottomed earlier in 2012 (the YoY change lags the turning point for prices).

The following table shows the year-over-year increase for each month this year. 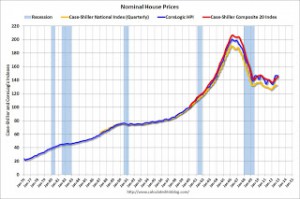 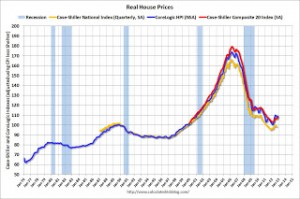 In real terms – and as a price-to-rent ratio – prices are mostly back to early 2000 levels.

Bill McBride, the author of Calculated Risk Blog, retired as a senior executive from a small public company in the ’90s. Mr. McBride holds an MBA from the University of California, Irvine, and has a background in management, finance and economics.  For more information, visit www.calculatedriskblog.com.