Housing Outlook 2014 – One for the Books – by Bruce Norris, The Norris Group

If you owned property at the beginning of 2013, you have to have a smile on your face today – right? After a near-record price increase in 2013, many headed into 2014 full of consternation. John Burns, who was a delight to have on our panel at the “I Survived Real Estate” event, e-mailed an article in late December entitled, “Housing Outlook 2014: Holding Your Breath!”

2013 surprised a lot of people…why? In 2013 prices cranked up by about 25%…why? What was in place at the beginning of 2013 that cut loose price increases and why wasn’t that recognized in advance? As we head into the second quarter of 2014 biting our nails, what’s the basis of our concern? What categories will be worse in 2014 than they were in 2013? What if we look at the important stats and come to the conclusion that starting in 2014, it looks like nothing important deteriorated?  Will we still be hesitant to say that prices will increase from here significantly?

The drop in affordability has been significant!Californiawent from 49% affordability to what appears to be 32% as of March. The real question about this category: What happens when we are at 32% affordability and heading lower? To figure this out, we have to look at the past and find similar circumstances. 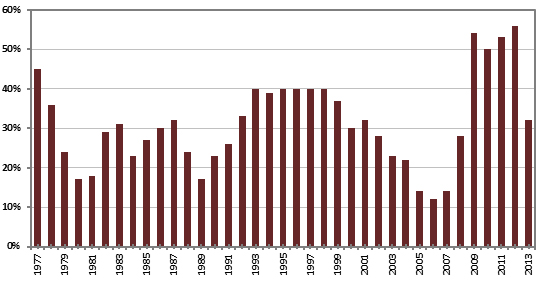 Remember, the circumstances we find ourselves in. Affordability is going down due to price increases and/or interest rate hikes. The past years that mimic our current situation are 1978, 1987, and 2001. If history repeats itself, you will be an accumulator of properties as an investor in 2014 – not a seller. You may read headlines in the papers about the dramatic decreases and crisis in affordability.  However, if you’ve been in the businesses a while, look at the affordability chart and remember where you were in 1978, 1987 and 2001. Consider what happened to price in the years that followed.

Interest rates have gone up considerably in 2013 from 3.38% to 4.19%. That rise in interest rates shook up some people. Due to price increases and interest rates rising, the consensus seems to be that so few people can afford real estate that prices have to slow or go down and volume of sales has to decline. On the surface, it sounds like that has to be true. Mathematically, it seems like perfect logic. Let’s take a look at sales volume during both rate hikes and affordability declines.

In the late 80s,Californiahad a brief bull run in prices accompanied by a sharp decline in affordability. Interest bounced between 9% and 10%, yet the volume of sales increased, with both 1988 and 1989 higher than any of the previous years.

In our most current example of a bull market, the volume of sales increased as affordability declined to all-time lows. We all understand the price increases weren’t real and would not have occurred if loan programs weren’t so ridiculously generous. However, let’s keep our eye on what was significant as well. At the end of all of those transactions was a willing buyer. The human being, be it occupant or investor, foreign or domestic, just can’t resist a bull market. Why are we so sure they can resist this one?

The capacity to absorb price increases will be in direct correlation to interest rate hikes. At some point, the monthly payment does become unaffordable.

The number of sales forCaliforniais down slightly from a year ago. Annual sales have been consistently over 400,000 sales since 2009. The projection for 2014 from the California Association of Realtors is 444,000 sales in 2014. That would represent an increase over 2013. Let’s check our starting inventory levels:

The unsold inventory for sale forCaliforniahas gone to 4.4 months in February. What’s probably most important is what type of inventory is for sale and is the makeup of inventory going to shift or continue on its current trajectory.

The shift has been very significant toward a healthier mix of what’s for sale. The norm is, the higher the percentage of equity sales, the more price increases occur until we hit the breaking point. When you add up the distressed sales percentage, it’s still nothing to sneeze about. Distressed sales are still 15% of theCaliforniamarket. More significant to me is the direction the market is headed. I no longer buy into any theory that suggests an avalanche of “shadow inventory” from any direction in 2014. By the end of 2014, you’ll have a market made up of well over 90% equity sellers. In that environment, lender-owned properties cannot negatively impact prices.

The prices will be determined by three participants: the equity-ladened seller, the about-to-miss-out buyer, and the cautious lender. The lender will ultimately determine the final tab of price increases during the next few years. I’m convinced the seller will do what they have always done. I believe the buyer will be willing to do likewise. The key will be, where will the money come from? Fortunately, the human being participates in the loan business as well.

In the summer of 2009, I was invited to have dinner with some of the largest hedge funds in the world. I was told that there was a quarter of a trillion dollars sitting at the table. My reason for attending was to get these hedge funds to provide financing for investors to buy and hold property. Remember, this was at the bottom of the market and everyone was scarred. The money I sought to get for our industry is about to show up in droves. Hedge funds are coming to the realization there’s money in making loans to large investors. My bet is that they will soon be creating lots of programs for owner-occupants as well.

If there’s a lagging category of willing or capable buyers, it’s the first-time buyer. A first time-buyer percentage of 28% is normal when prices have accelerated beyond the reach of the new buyer, but that’s not the case this time. So, if first-time buyer affordability is still extremely favorable, what’s the problem?

My guess is that they are having a very tough time competing with the cash buyer. That’s the main reason they aren’t a bigger percentage and why the FHA loan program is shrinking in volume.

At a 17% market share, FHA’s volume inCaliforniais down over 40% since 2009. First-time buyer affordability may be a little piece of the problem, but lender policies are the biggest problem. Who FHA is lending to has changed drastically from the boom days. If you have a FICO score that’s below 650, the current FHA lending polices make it pretty tough to qualify.

The biggest problem for the first-time buyer is they are interested in the exact same inventory the buy-and-hold investor is interested in. Tighter inventory, tough lending, and competition will make it harder for first-time homebuyers but not impossible.

One of the things we keep a close eye on is regulatory and legislative intervention. I know we all seem to scratch our heads collectively at times. January was one of those months when the FHA lowered its loan limits. In some markets likeRiversideandSan Diego, it was lowered by 30%. When I read that Fannie and Freddie would keep their loan limits where they were, I falsely assumed FHA would follow suit in 2014.

In a March interview on our radio show with the National Association of Realtors Vice President, Beth Peerce, we talked extensively about potential regulatory and legislative changes moving forward. Dodd-Frank still hasn’t implemented all planned changes, the mortgage interest deduction still finds itself on the chopping block as a way to fill the budget gap, and at the state level, Proposition 13 still gets thrown into the ring for debate.

Recovery from the “Great Recession” still seems to have the Feds concerned. The new Fed Chair, Janet Yellen, said it best at the end of March when addressing investor concern about unemployment and government money pumping:

“This extraordinary commitment is still needed and will be for some time, and I believe that view is widely shared by my fellow policy makers. The scars from the Great Recession remain, and reaching our goals will take time.”

I don’t expect any drastic and sudden moves under current conditions. As I write this in later March, our hard money business has seen a marked increase in activity. Much of that is seasonal. Our network has been around the block a few times and started shifting their buying strategies to working with non-distressed sellers last year. Do be mindful of areas that have inflated past pre-bust prices like the Bay Area. Those areas are highly speculative.  I am still bullish on real estate in 2014 and look forward to sharing more at the Apartment Owners Association’s FREE Trade Show and Landlording Conference in Long Beach on May 15th.