Inflation Higher Than Reported, Jobs Not as Strong Either By Gary Halbert 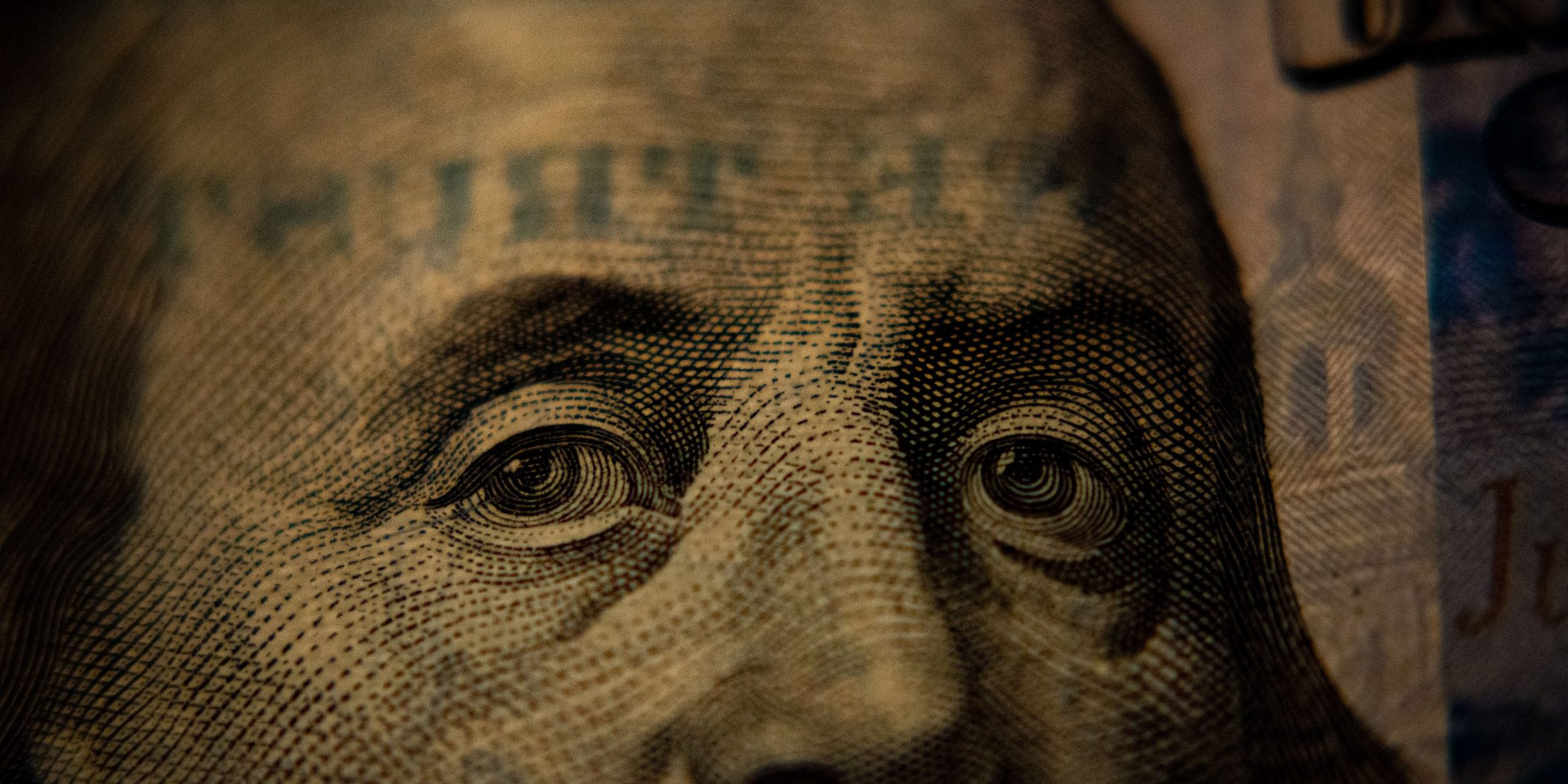 Over the summer, we’ve been told that inflation rose to a 40-year high. It’s even higher than that if measured by conventional methods of the past. We’ve also been told the labor market is the tightest in decades, a good thing, but that’s not entirely true either. The fact is, consumer finances have deteriorated at the fastest rate ever this year, making a recession even more likely. While not good news, that’s what we’ll talk about today.

The debate rages on about whether we’re already in a recession or not. I have argued in recent weeks that the answer is not clear yet. However, the evidence is mounting that if we’re not in a recession yet, we will be soon. I’ll try to pull the latest economic reports together and make some sense of it all, if that is possible. Let’s start with inflation.

Inflation Hits 40-Year High, But Really Is Even Higher

Over the 12 months ended June 2022, the Consumer Price Index for All Urban Consumers increased 9.1%. The 9.1% increase in the “all items” index was the largest 12-month increase since November 1981 – over 40 years. While the CPI decreased slightly in July to 8.3%, it is still the highest in decades.
But if we calculated the Consumer Price Index the way we used to do for years, it would be above 12% today. Some forecasters believe the current inflation rate is even higher than 12% today, with one contingent of economists arguing it is 15%-16%.
The Consumer Price Index (CPI) is a measure of the average change over time in the prices paid by urban consumers for a basket of consumer goods and services. The twice-monthly CPI is published by the Labor Department, and the formula and methodology for calculating it have changed numerous times since it was first created in 1921.
One way to understand today’s inflation is to compare it to the last major inflationary spiral which occurred during the Jimmy Carter administration in the late 1970s and early 1980s.

The headline Consumer Price Index (CPI) – the measure of total consumer inflation in the economy – peaked in March of 1980 at 14.8%. As noted just above, in June of this year, the headline CPI inflation rate was 9.1%, well below the 14.8% during the Carter administration. On the surface, that comparison is reassuring. We’re still well below where we were in the late Carter years.

But is the comparison valid? There’s a lot of evidence to suggest that it isn’t. Here’s why.

In 1983, the government significantly changed how it calculated the Consumer Price Increase for goods and services in ways that understated inflation going forward. The Labor Department, which produces the CPI, argued at the time that the government’s methodology for calculating inflation was outdated and needed to be changed.
Others, however, including me, argued that the government changed the way the CPI is measured because the inflation rate is used to determine the size of many government benefits and how much they increase each year. By changing the formula for calculating the inflation rate to something lower, as they did back then, meant the government would pay out less in benefits going forward each year.

The bottom line is, inflation is almost certainly higher than the 9.1% print for June and the 8.3% reported for August. The only question is how much higher. The Labor Department doesn’t seem to agree and shows no indication it is prepared to make any significant changes to the way the CPI is calculated. So, the headline inflation rate is likely to continue to be understated indefinitely.
Now, let’s switch our attention to the jobs market which may not be as strong as the media would have us believe.

The Labor Department reported that new jobs created in July soared by a whopping 526,000, one of the largest monthly gains ever, and more than twice the level expected. The number of new jobs created in August was reported at 315,000, also a better-than-expected number.
From February 2020 to April 2020, the economy shed a stunning 22 million jobs – thanks to Covid lockdowns –which we now know were completely pointless.
In the nine months following that trough, the economy added back 12.5 million of those jobs as businesses reopened. Then Biden took office. And in the 18 or so months since he’s been calling the shots, the economy recovered only nine million more jobs, and even now hasn’t surpassed the previous peak in employment prior to Covid.

It is true that private-sector employment hit a new peak in June, surpassing the previous peak set in February 2020. But just barely – by all of 140,000. Total employment, however, is still 524,000 below its Trump peak.
The point here is, the jobs market has come back strongly since the Covid lockdowns, but what else would we expect? The lockdowns led to the largest loss of jobs in history. And finally, President Biden’s economic policies have yet to grow total jobs growth back to the level it was before Covid; it is still over 500,000 jobs short of a new high.

The University of Michigan’s Consumer Sentiment Index hit a record low of 50 in June before recovering somewhat in July and August to 58.2. If you look closely at the chart below, you can see this decline actually began in 2020, and it has been the steepest in history, going back to 1978 when records started being kept. 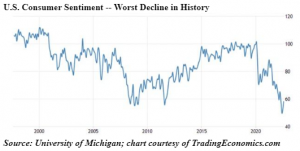 The final August reading continued the early month improvement in consumer sentiment, rising 13% above July but remaining 17% below a year ago. Most of this increase was concentrated in expectations, with a 59% surge in year-ahead outlook for the economy following two months at its lowest reading since the financial crisis of 2008-2009.
In addition, personal financial expectations rose another 12% since July. The gains in sentiment were seen across age, education, income, region, political affiliation and can be attributed to the recent deceleration in inflation.
The gains in sentiment can also be attributed to the significant decline in gasoline prices we’ve seen this summer. After hitting a record high above $5 a gallon in mid-June, the average US gas price has now fallen by more than 20% to back below $4 a gallon, according to AAA. Gas prices are influential in consumers’ view of inflation and of their overall sentiment about the economy.
Lower income consumers, who have fewer resources to buffer against inflation, posted particularly large gains on all index components. Their sentiment now even exceeds that of higher-income consumers, when it typically lags higher-income sentiment by over 15 points. Hopefully, this tentative improvement will continue, as overall sentiment remains extremely low by historical standards.
The University of Michigan’s Sentiment Index consists of about 50 core questions which cover consumers’ assessments of their personal financial situation, their buying attitudes and overall economic conditions. It is not to be confused with the governments Consumer Confidence Index which is produced by the Conference Board.
While the two indexes are similar, they are calculated differently and measure different components, they generally show similar trends. Here’s a look at the Consumer Confidence Index. 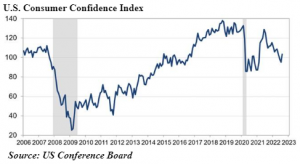 Source: US Conference Board

As you can see, the Consumer Confidence Index did not hit a record low this year, but it did plunge significantly since the peak in 2019.

Conclusions: So, Are We in a Recession or Not?

While many forecasters believe we are already in a recession, the National Bureau of Economic Research (NBER) – the arbiter of when recessions begin and end – has still not declared we are officially in a recession. But when we see a historic fall in consumer sentiment, as discussed above, it looks very likely the NBER will be making such a pronouncement any day now.
The major stock market indexes are all down double digits this year, but if you have invested in our Alpha Advantage Strategy, you have enjoyed strong double-digit returns again this year. This strategy has delivered phenomenal results, and most impressively this year as the stock market indexes have fallen significantly. As always, past performance is no guarantee of future results.

Categories: Current Events, EconomyBy Israel PeredaNovember 1, 2022
ARCHIVED ARTICLES
Go to Top
We use cookies on our website to give you the most relevant experience by remembering your preferences and repeat visits. By clicking “Accept”, you consent to the use of ALL the cookies.
Do not sell my personal information.
Cookie settingsACCEPT
Manage consent