Is This the Worst Economic Recovery on Record? – By Gary D. Halbert

The Great Recession officially ended in June of 2009. Yet, the Congressional Budget Office (CBO) recently estimated that real GDP will grow by only 1.4% this year.  If that proves true,America will continue its worst economic recovery in the Bureau of Economic Analysis (BEA) data going back to 1930.

I actually wrote about the weakness of this recovery earlier this year.  Now, we look at the poor economic growth from another angle – one that will illustrate just how paltry this economic recovery has been in historical terms.

To do my analysis, we calculated the GDP growth rate in rolling 10-year increments (as the CBO does) starting from 1930. Averaging annual GDP growth on a 10-year rolling basis shows the following:

Now here’s the kicker: Since BEA began gathering GDP growth statistics in 1930, there has never been a time when GDP growth averaged less than 2.0% for more than one consecutive rolling 10-year time period – that is, until recent years. For example, if 2013 GDP growth hits the CBO’s estimate of only 1.4%, then we will witness the fifth consecutive rolling 10-year period during which economic growth has averaged less than 2.0%.

For as long as the BEA has been keeping data (1930), an economic recovery has never taken this long to get back to “trend,” which is generally considered to be at least 3% GDP growth by most economists and forecasters.

Such a dramatic break with the past begs the question: Why? Did the financial crisis alone account for what we are seeing? For several years now, we have sought to convince ourselves that it did. Others argue that the reason is we had two recessions in a single decade for the first time since records have been kept. Clearly, that is also a factor.

But perhaps it is finally time we looked harder to see if the problem runs deeper. It does. Think demographics (aging population), technology (jobs eliminated), work ethic and a host of other factors. All of this deserves much more attention in the national media.

I write a lot about the Federal Reserve, probably more than some of my readers want to know. But since the Fed can often be a major driver of the markets (i.e. the recent runaway bull market in stocks), investors need to know what’s happening with the Fed.

As you well know, the Fed has been on a massive stimulus binge since 2008 in an effort to jump-start the economy and stave off deflation. The Fed’s “quantitative easing” (QE) programs have purchased over $3 trillion in mortgage and Treasury securities. Since last September, the Fed has been buying $85 billion a month in these securities in an effort to drive down long-term interest rates and spur the economy.

The Fed’s “balance sheet” stands at a record $3.2 trillion. At its present rate of buying, the balance sheet will be almost $4 trillion by year-end. Naturally, there is increased speculation on when the Fed will end its unprecedented buying binge. At his press conference on March 20, Fed Chairman Ben Bernanke hinted that the Fed might consider reducing, or even ending, its monthly purchases later this year if economic indicators continue to improve.

Then, of course, came the miserable unemployment report for March showing only 88,000 jobs created last month, versus around 200,000 that were expected, and almost a half-million people leaving the workforce altogether. With that terrible unemployment report, most Fed watchers assumed there was no way the Fed would end QE anytime soon… Maybe, maybe not.

Their March minutes gave a clear indication that FOMC members are leaning toward pulling the plug on the $85 billion a month of asset purchases by the end of this year. Here are some excerpts from the March 19-20 FOMC meeting (emphasis is mine):

In light of their discussion of the benefits and costs of asset purchases [$85 billion per month], participants discussed their views on the appropriate course for the current asset purchase program. A few participants noted that they already viewed the costs as likely outweighing the benefits and so would like to bring the program to a close relatively soon. A few others saw the risks as increasing fairly quickly with the size of the Federal Reserve’s balance sheet and judged that the pace of purchases would likely need to be reduced before long. Many participants, including some of those who were focused on the increasing risks, expressed the view that continued solid improvement in the outlook for the labor market could prompt the Committee to slow the pace of purchases beginning at some point over the next several meetings, while a few participants suggested that economic conditions would likely justify continuing the program at its current pace at least until late in the year.

More and more FOMC members are becoming concerned that the costs and risks to the asset purchase program are growing, especially in regard to what might happen if the Fed decides at some point to reduce (i.e. sell) part or all of its portfolio. And then there is this:

Members stressed that any changes to the purchase program should be conditional on continuing assessments both of labor market and inflation developments and of the efficacy and costs of asset purchases. In light of the current review of benefits and costs, one member judged that the pace of purchases should ideally be slowed immediately. A few members felt that the risks and costs of purchases, along with the improved [economic] outlook since last fall, would likely make a reduction in the pace of purchases appropriate around midyear, with purchases ending later this year. Several others thought that if the outlook for labor market conditions improved as anticipated, it would probably be appropriate to slow purchases later in the year and to stop them by year-end…

This is why it pays to read the FOMC minutes! None of the discussions quoted above were included in the official policy “statement” released at the close of the March meeting. But now we know that the FOMC is clearly contemplating the end of the $85 billion a month in asset purchases, despite what Bernanke & Co. put in their policy statements.

Let me remind you that the FOMC minutes quoted above came from the March 19-20 meeting, more than two weeks before the stunning March unemployment report on April 5. Thus, it remains to be seen how this very discouraging jobs report may have affected the thinking of the voting members of the FOMC.

The next FOMC meeting is April 30-May 1. That meeting will not be followed by a press conference with Chairman Bernanke. The next meeting after that will be on June 18-19 and there will be a Bernanke press conference following that meeting. That could be a very interesting press conference, especially if the Committee decides when and how to end QE – or even if they don’t.

[Gary’s Note: Before we get started, and for the record, I criticized every one of George W. Bush’s budgets during his eight years in office. I likewise criticized Bill Clinton’s budgets. I even criticized some of Ronald Reagan’s budgets. So what follows is nothing new.]

The President of theUnited Statesis required by law to submit a federal budget to the Congress by early February. The Obama administration submitted its FY2014 budget to Congress – two months late, but no one seems to care. The Dem-controlled Senate hasn’t delivered a required budget in four years until now, so it’s hard to criticize the president (but we should).

These budget forecasts include a 10-year projection of annual spending, revenues and deficits. These 10-year projections are meaningless, other than giving presidents some talking points to brag about. The long-term forecasts are rarely even remotely accurate!

President Obama claims that his latest budget proposal will reduce annual deficits by almost $2 trillion over 10 years. Where he got this number, no one knows. His new budget proposal eliminates the $1.2 trillion in “sequester” spending cuts and increases federal spending by $247 billion over the next two years alone. How do you decrease the deficits by increasing spending? Answer: you don’t!

President Obama claims that his new budget will raise at least $580 billion in new “revenue” without officially raising income tax rates. But it significantly raises taxes and fees on upper income Americans in other ways. For example, households with income over $1 million must pay a minimum of 30% of their income in federal taxes, if Obama gets his way.

Obama’s new budget would even raise taxes on the middle class, something the president said he would never do. Obama proposes to change the government’s “Consumer Price Index” in a way that will lower the official inflation rate. This is a stealth way to cut Social Security’s annual “cost of living adjustments,” which are currently based on the CPI.

But because his “chained CPI” would also apply to annual tax bracket adjustments, it will end up hiking taxes by $124 billion – mainly on the middle class – over the next decade through “bracket creep,” this according to the Congressional Budget Office.

Obama’s new budget also calls for the implementation of a new “Pre-School for All” program that would be free for children ages 3 to 4 years old from low to moderate income families. The estimated price tag would be $76 billion over 10 years and would be largely paid for by a tax hike on cigarettes. Government-run pre-K, just what we need. Not!

So Where Do We Go From Here?

In conclusion, here’s where we stand on the budget. The House of Representatives passed its FY2014 budget in March. It purports to cut spending by $5 trillion over 10 years and would balance the budget by 2023 according to the projections. It has no chance of being adopted, in my opinion.

The Senate recently passed its first budget in four years. This budget reduces the federal deficits to around $400 billion in 2016-2018, but then sees deficits rising to around $600 billion by 2022. It never balances the budget.

Then there is President Obama’s budget which actually increases spending each year, but raises taxes significantly and projects deficits falling to around $450 billion by 2023. This budget also fails to ever balance the budget. 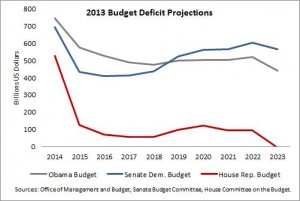 Essentially, President Obama has put the GOP leadership in a position where they must argue against increasing revenue through higher taxes on the “wealthy.” We witnessed how difficult that position can be during the fiscal cliff negotiations when the Republicans got nothing in return for higher tax rates on the rich (families earning over $450,000).

The GOP leadership maintains that the president got his tax increase in the fiscal cliff deal reached on New Year’s Day. Speaker Boehner and other Republican leaders in the House have vowed to vote against any budget deal that raises taxes.

If this resistance holds up, we may not get a broad budget deal at all, in which case we would revert to another “continuing resolution” to fund the government at the current levels imposed by the sequestration. The continuing resolution would be passed either before the next government shutdown date – September 27 – or shortly thereafter.

With the Senate budget and Obama’s budget so far from the House proposal, I don’t see much negotiating room on either side. It looks like a long spring and summer culminating in another cliff-hanger in late September.

All total, Obama’s new budget would result in over $1 trillion in tax increases, deduction limitations and new fees over the next decade, assuming Congress goes along.  Hopefully, it won’t!

[AOA would like to hear from you.  Why do you think the politicians never balance the budget?  Do you balance your budget?  Send your response to the AOA office nearest you or email editor@aoausa.com and thank you for caring.]