The jobs report for March was initially hailed as good news because the Bureau of Labor Statistics reported that 192,000 new non-farm jobs were added last month. That was better than expected by many forecasters and was well above the 175,000 jobs created in February. But companies almost always hire more workers in March when the weather warms up. The official unemployment rate held steady at 6.7% in March.

The other encouraging news, if we can call it that, is the fact that “total private” employment finally inched above the previous peak in early 2008 when the Great Recession was starting to unfold. As you can see below, total non-farm, private sector jobs climbed to 116.1 million in March. That’s good news in that it was better than in recent months, but it has taken us six years to get back to essentially breakeven with 2008. 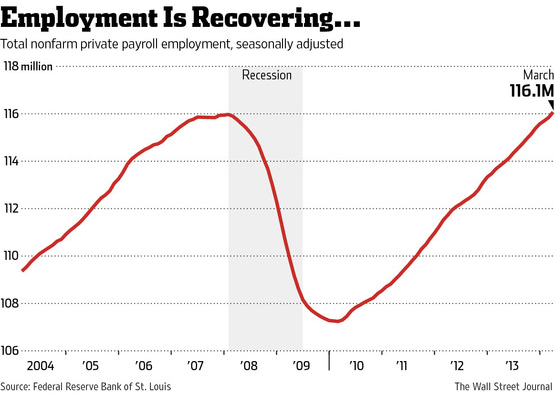 Here’s another way to look at it. The chart above represents only the number of non-farm private sector jobs. If we add to that number the roughly 21.9 million government jobs we have today, the country has a total of 137.9 million jobs overall. Yet that number is well below the total number of jobs we had back in 2008 of 138.5 million. That’s a deficit of approximately 600,000 jobs.

So six years after the start of the downturn, our economy is still roughly 600,000 jobs shy of where it had been, mainly because government at all levels has been forced to cut back workers in austerity moves.

Now let’s look at the labor force participation rate. This number represents the percentage of the total population that is either working or actively looking for work. The number actually ticked higher in March to 63.2%, but take a look at the longer-term trend: 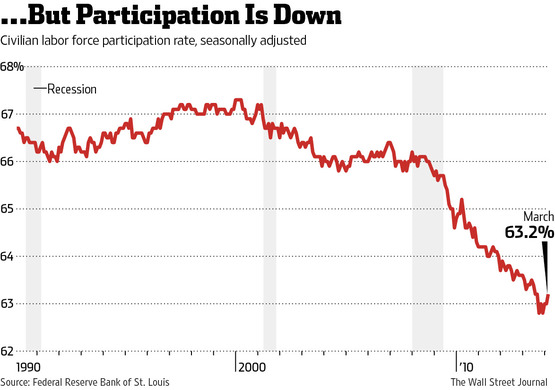 Labor force participation rates increased from the mid-1960s through the 1990s, driven largely by more women entering the workforce, Baby Boomers entering prime working years in the 1970s and 1980s and increasing pay for skilled laborers. But over the past decade, these trends have leveled off, and the participation rate has fallen sharply, particularly in the aftermath of the last recession.

The question is will the participation rate recover to the levels seen in the 1990s? Probably not in the next 20 years or longer. A late 2012 study by the Federal Reserve Bank ofChicagofound that about one-quarter of the decline in labor-force participation since the start of the Great Recession can be traced to retirements.

Yet Baby Boomers retiring can’t be the whole story, though, since the participation rate has declined for younger workers too. This part of the drop is a function of various factors, including simple discouragement, poor work incentives created by public policies, inadequate schooling and training and a greater propensity to seek disability insurance.

Globalization and technological change have also reduced employment and wage growth for low-skilled workers. These trends are not likely to change anytime soon.

The fierce debate now going on inWashingtonabout extending unemployment insurance and raising the minimum wage largely ignores these issues. Such policies may affect the incomes of some Americans, but they won’t do much to expand opportunity and bring more people back into the labor force. But I’ll leave that discussion for others to debate.