While this may not come as a surprise, many U.S. small businesses that are shuttered right now face a financial disaster. Unfortunately, it is becoming increasingly clear that millions of small businesses may not be able to reopen their doors when the economic lockdown ends.

Karen Mills, the previous head of the U.S. Small Business Administration (SBA), said on April 4th that “20%, even 30%, of small businesses could fail even in a good scenario.”

She warned that without immediate support to buffer the cash flows of stalled businesses waiting for the economy to reopen, it is a matter of days until millions of companies begin to shut their doors permanently – driving unemployment up significantly and sending the economy into a tailspin.

It remains to be seen if the new “Paycheck Protection Program,” included in the latest $2.2 trillion stimulus bill, can ramp up fast enough and expand sufficiently to avert this small business crisis. Every American should be very concerned about this, so that’s what we’ll talk about.

While the discussion about the financial crisis facing millions of small businesses is admittedly depressing, we all need to be aware what is happening and the possible ramifications. Fortunately, I’ll end this discussion on a positive note with a new prediction from Goldman Sachs.

Before we get to that discussion, I want to briefly discuss [April’s] huge unemployment claims report, and the announcement the same day by the Fed that it plans to inject another $2.3 trillion of stimulus into the economy just ahead.

[In early April], the Labor Department reported that another 6.6 million Americans filed for unemployment insurance in the latest week, following a revised 6.9 million in the previous week and 3.3 million in the week before that. In [that time period], new claims for unemployment benefits topped 17 million, the worst in American history including the Great Depression. Put differently, we have now lost 10% of the American workforce in just a month! And, unfortunately, the job losses are far from over.

At the same time that the jobs report that was released, the Federal Reserve announced a stunning new stimulus program which will provide up to $2.3 trillion in additional lending to small and medium-sized businesses, state and local governments and even consumers. That will bring the Fed’s balance sheet to an unprecedented $5+ trillion.

Upon making the unprecedented announcement of an additional $2.3 trillion, Fed Chairman Jerome Powell said the Federal Reserve stands ready to do whatever is necessary to stabilize the economy and the financial markets. Specifically, he said:

“The Fed’s role is to provide as much relief and stability as we can during this period of constrained economic activity, and our actions today will help ensure that the eventual recovery is as vigorous as possible.”

While his comments were meant to reassure institutions and investors alike, they sounded like a Fed in panic mode to me! Now let’s move on to our main topic.

Fast Facts Regarding Small Businesses and Role They Play

Before I get into the specifics of the financial crisis facing U.S. small businesses that are shuttered, let’s look at some fast facts about American companies with 500 or fewer employees. There were just over 30 million small businesses at the end of 2018, according to the U.S. Commerce Department.

In recent years, there have been over 600,000 new small businesses started every year – although that number is expected to fall significantly in 2020 due to the recession. Some 60%-65% of all new jobs are created annually by small businesses.

75% to 80% of small businesses are self-financed, meaning the owner put up his/her own money to start the business. Only about 16% started the business with loans from banks, family members, friends, etc.

Over 71% of small businesses reported they had a website in 2018, and most that didn’t said they had plans for one soon. Of those that had a website, 71% said they use social media to attract more customers.

Finally, if you think it’s easy to start a successful small business, it isn’t! The Small Business Administration reports that 20% fail in year one, 30% fail by year two and 50% fail by year five. Starting a new small business is very risky but, nevertheless, hundreds of thousands of American entrepreneurs try it each and every year (2020 notwithstanding).

In March of this year, Goldman Sachs surveyed over 1,500 small business owners with a variety of questions. Most importantly, virtually all of the respondents (96%) expressed serious concerns over the coronavirus crisis and the economic lockdown. That’s not surprising.

However, what was surprising was the fact over half of small businesses surveyed (51%) reported they have only one to two months of cash reserves to carry them through the lockdown and the recession we’re now in.

Over half (53%) said their employees were not able to work from home. Only 13% said they were confident about their contingency plan to meet the needs of their business during this troubling period in the economy. Here are the highlights of the small business survey: 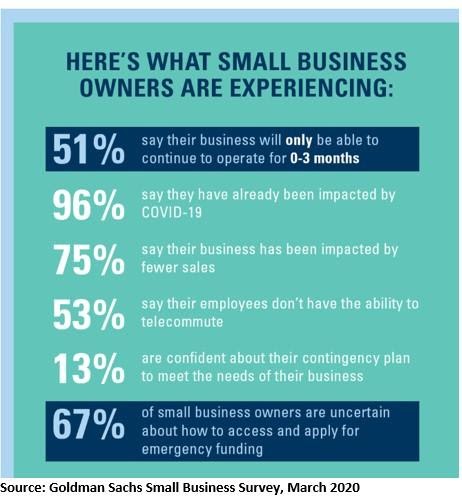 Let’s pay particular attention to the last factoid in the graphic above, bearing in mind that the Goldman Sachs survey of small businesses happened in March. At that time, over two-thirds (67%) of small business owners were unsure about how to apply for emergency funding under the new Paycheck Protection Program.

The Paycheck Protection Program (PPP) is a loan designed to provide a direct incentive for small businesses to keep their workers on the payroll. The SBA will forgive the loans if all employees are kept on the payroll for eight weeks and the money is used for payroll, rent, mortgage interest or utilities associated with the business.

There is evidence that a lot of small business owners did learn how to apply for PPP loans over the last month based upon the huge amount of applications that were filed in the first five days the program was available earlier [in April]. A spokesman for the SBA stated on Thursday of last week that more loan applications were received in those first five days than they normally receive in an entire year!

Then the SBA reported that banks had approved more than 725,000 loans for the  $349 billion available through the PPP, totaling over $182 billion – over half the money currently available. That’s progress, for sure, coming a week after business owners could first begin applying, a launch marked by chaos and confusion. But the problem is, most of the approved applicants have not received any money yet and don’t know when they’ll get it.

A new website, CovidLoanTracker, is designed to track PPP loans to small businesses, but as of Saturday, it reported that only 2% of approved applicants have received funding. Surely the process will speed up significantly between now and the end of the month, but that remains to be seen.

Then there is the issue of the PPP running out of money. President Trump has asked Congress for an additional $250 billion right away, but Republicans and Democrats couldn’t immediately agree on how the money should be allocated. We’ll see how that turns out.

But the bottom line is: Many small businesses are out of time and money now! They simply cannot wait several more weeks or longer to get their loans approved and hold on until the money arrives. Hopefully, the PPP process will speed up in time to save the day, but we’ll have to see, especially with Congress bickering over additional funding for this critical program.

If more progress is not made really fast, I unfortunately fear that millions of small businesses may never reopen. I hope I am wrong! As I stated in the introduction above, if we lose 20-30% of U.S. small businesses just ahead, that’s a Depression.

Goldman cited the fact that the Fed promised $2.3 trillion more in stimulus last week and new evidence that the coronavirus crisis appears to have peaked, or at least slowed its rate of growth. Let’s hope Goldman’s latest bold forecast is correct!  Wishing you strength and good health.

Category: UncategorizedBy AOA EditorJune 1, 2020
Tags: AOAlockdownsmall business
Go to Top
We use cookies on our website to give you the most relevant experience by remembering your preferences and repeat visits. By clicking “Accept”, you consent to the use of ALL the cookies.
Do not sell my personal information.
Cookie settingsACCEPT
Manage consent