West Coast markets will dominate the top 10 on gross income growth in 2017 for the multifamily market, led by Seattle, Sacramento, Tacoma, Portland and Colorado Springs, according to the Freddie Mac Multifamily Research Group’s mid-year outlook.

Outlook authors Steve Guggenmos and Sara Hoffmann find that the multifamily market will continue to grow for the rest of 2017 and into 2018.

Although the market will continue to moderate from cyclical highs, demand for rental housing units will remain steady. As a result, Freddie Mac is predicting that origination volume is likely to hit another record in 2017, reaching between $270 and $280 billion, according to a release. Market uncertainty kept many multifamily investors on the sidelines in the first quarter of the year, but they are starting to return as interest rates moderate and the economy continues its steady upward trajectory.

Highlights from the Multifamily Market Outlook

Due to steady economic growth and strong demand for multifamily units, rent growth is expected to be similar to 2016 levels and vacancy rates will increase more slowly than initially forecast. However, the number of construction projects are expected to peak in 2017 or early 2018, which will push vacancy rates higher. Absorption of new units in some areas will take longer than in prior years, putting some downward pressure on rent growth.

“In the first half of 2017 multifamily performance, by most measures, remained near the historical average in the majority of markets across the country,” Steve Guggenmos, Freddie Mac Multifamily vice president of research and modeling, said in the release.

Some larger metropolitan areas  such as San Francisco, New York City, Washington, D.C. and Miami  saw significant construction in the past year, which has pushed vacancy rates up and slowed rent growth. However, according to the Outlook, nearly two-thirds of metros will end the year with vacancy rates below their historical averages. In these areas, demand continues to outpace supply, which allows rents to keep rising. 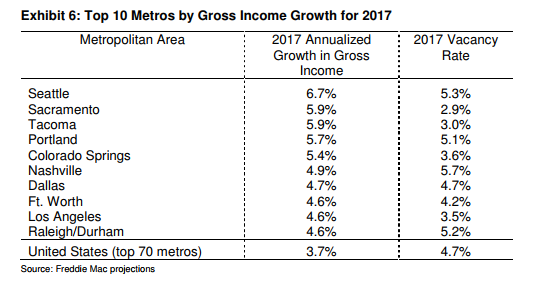 West Coast metros still will dominate the top 10 list based on gross income growth in 2017, but more secondary markets from across the South are also poised for strong growth through the rest of the year,.

As vacancy rates remain tighter in 2017 than expected at the beginning of the year, areas including Nashville, Dallas, and Raleigh/Durham are forecast to see stronger gross income growth.

Looking beyond 2017, vacancy rates are expected to continue to trend up, but the economy’s overall performance will determine the impacts to rent growth. With good macroeconomic conditions, rent growth will continue near the current pace. However, any uncertainty about the economy’s well-being could change that.

Guggenmos added, “All things considered, 2017 will be yet another good year for the multifamily market. And importantly, it will not be the market’s last strong year. Strong demand, fueled by demographic changes and lifestyle preferences, will ensure the multifamily market’s continued strength in the years ahead.”

Category: UncategorizedBy AOA EditorOctober 1, 2017
Go to Top
We use cookies on our website to give you the most relevant experience by remembering your preferences and repeat visits. By clicking “Accept”, you consent to the use of ALL the cookies.
Do not sell my personal information.
Cookie settingsACCEPT
Manage consent