Something to Think About #113: William Mulholland by Klarise Yahya

Dublin’s port lies on the River Liffey, where it runs into the Irish Sea, at the approximate latitude of Liverpool. It was there, in Dublin, that William’s mother died when he was seven years old. His father, a guard for the Royal Mail, remarried. Arrangements were made to have William accepted in the Junior Cycle of the O’Connell School, a charitable (i.e., free) school for male students aged 12 to 15. The curriculum is today unequally divided between mathematics and the sciences and, more heavily, on the humanities. There is no reason to think the curriculum was structurally different in 1870. It was, for the times, a good school, and the father had high expectations for the son. Perhaps he hoped for his son one day to ascend high enough to elevate the social standing of the entire family.

Junior Cycles ended with a comprehensive examination which, if passed, qualified the student to advance to the school’s Senior Cycle (ages 15-18). If, at the end of the Senior Cycle the graduation exam was passed, then university enrollment became feasible and social elevation might follow. If the student did not advance to (and complete) the Senior Cycle, he would not qualify for university and a father’s dreams ended in disappointment.

It was 1870 and William Mulholland, then 15 years old, failed his Junior Examination. He would not continue to the Senior Cycle. There was no reasonable chance of attending a university. His father was displeased and expressed it by serving his son yet another remedial beating. It was not William’s first pummeling, but this time was different: he escaped his father’s wrath by breaking loose and running directly to the local docks. That night was the last time Mulholland’s pere saw his eldest son.

William found escape on the Gleniffer, a transatlantic merchant vessel making routine cargo runs between Britain and the Americas, primarily the United States but including the occasional Caribbean voyage when the profit was there. Should his father’s unlikely search discover where his eldest son was, even to the ship’s name, William would be somewhere on the Atlantic and well beyond reach.

William Mulholland was on the Gleniffer for four years, quietly leaving in 1874 while the ship was discharging cargo in New York. He was an itinerant laborer for the next two years before he returned to New York to stow away on a vessel bound for California. He was discovered while the ship was briefly in Panama and was put off to walk the 50 miles (depending on the paths trod) through the jungle to Panama’s western port, Balboa. There he found work on a ship scheduled to dock in Los Angeles, where he arrived in early 1877.

There were about 8,000 people in Los Angeles at the time, but there were no jobs to be had. William Mulholland knew nobody in Los Angeles. He had little money and didn’t speak Spanish, the then-prevailing language. To anyone who cared enough to look, he was simply a drifter washed up by the sea, likely to leave on the next tide with his employer’s payroll in his sea-bag.  He was indistinguishable from the scores of unknowns leaving a docked ship to find easier pickings on shore, and making a dogs-breakfast of it. Mulholland resigned to signing on to another craft, and was walking towards the docks when Frederick Eaton, who at that moment needed somebody cheap, offered him a job working on the ditches.

Los Angeles was watered by the ditches. Zanja Madre, the mother ditch, ran from the Los Angeles River westerly-ish past Union Station to where the Alameda St. on-ramp currently meets the Hollywood (101) Freeway. From the Mother Ditch were dug secondary and tertiary ditches that delivered water to individual subscribers.

Locally, ditch-riders were called by the Spanish term, zanjeros. They were needed throughout the south-west (California, Arizona, New Mexico, parts of west Texas) where people with limited access to water struggled to get by. The zanjero was responsible for minimizing water loss. He controlled the flow by placing a scoop of soil here to block the sluice, or by removing a spade-full there to open the flow. He was alert for signs of leaks or contamination (refuse disposal, or the inevitable small dead animal, for two examples), and reduced illegal use by people with unpaid water permits. This was not a lowly occupation. Water was precious. Wikipedia notes that “The position was considered to be more important than even the Mayor of Los Angeles during the city’s rapid expansion in the mid-1800s, earning the highest salary of any official for many years.”  The “Duties of Deputy Zanjeros”, as of 1879, is seen below. 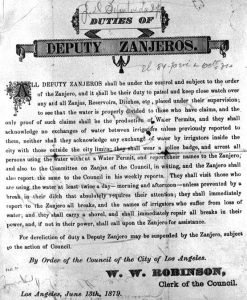 Mulholland, the zanjero, and Frederick Eaton, the superintendent of the Los Angeles City Water Company, over time, became close friends. Eaton mentored Mulholland in the ways of the Water Company, and Mulholland reciprocated by supporting Eaton’s interests on every occasion. There were few conflicts because they shared similar views. For example, they were both aware that population is capped by the necessary element in shortest supply. For coyotes it’s rabbits. For rabbits it’s grass and herbs. For Angelinos, like grass and herbs, it’s water.

William Mulholland could have remained a zanjero to scoop here or spade there, to use one’s shovel to flip the polluting remains of a decaying rabbit into the bushes for the dogs to fight over. Being a zanjero held the promise of a reasonable life and, at higher levels of responsibility, became well paid. But he’d always held a deep interest in the practical side of things, in how physical things were assembled, chunk by chunk, into a greater and more useful whole.

Just as in the practice of law, where in Britain the barristers (permitted to present arguments before the court and to wear white wigs) and solicitors (who wrote contracts, bills of sale, prenuptials, etc) occupied different roles, so in many places do mechanics and engineers make divergent contributions. Engineers determine the details of the semiconducting wafer that completes the circuit. A mechanic takes the circuits the engineer has designed and fabricated and plugs them into the motherboard. The engineer fits pieces; the mechanic assembles pieces.

Mulholland may have been unsuited for engineering, having failed his Junior Cycle exams, but he was a self-taught wizard at water-system assemblage.

In 1886, the approaching water shortage was becoming increasingly apparent. Eaton, the political genius, and Mulholland, the autodidactic hydro-mechanic, mutually supporting each other at the professional level, began to activate the plan they’d developed.

Mulholland expanded the delivery network through dams, above-ground reservoirs, and additional ditches. As has been noted, Los Angeles has a Mediterranean climate characterized by seasonal rains. Mulholland’s intent was increasingly to use dams and storage tanks to save the runoff from the late winter / early spring rains for release in the dry months of summer and autumn. Evan so, he (and Eaton, who held the title of City Engineer) recognized it was a stopgap measure: the Los Angeles River only gave so much, even in wet years. Two or three successive dry years would be disastrous.

Between 1900 and 1910 the city’s population tripled from 100,000 to 320,000. That was a sixfold increase in 20 years, a growth rate beyond the means of Zanja Madre. Think of trying to start a family, and, after several years of having no results from the proof-of-concept approach, a baby finally arrived. No problem. Stick him in the second bedroom where the treadmill is. Learn to say, “Baby’s crying. Your turn to change him.” Then, consider that over the next two decades five more babies were delivered. That’s a sixfold bump to your population density. That mirrors Los Angeles’s growth from 1900 to 1920. That sort of increase, whether in the City of Los Angeles or the beige stucco house on 6th St, means that there is no longer enough. There are no longer enough bedrooms or bathrooms, there’s not enough garden, or washing machines or dryers or money. Nothing remains forever enough in the face of ever-increasing needs.

As with babies, so with water systems: when population overcomes infrastructure, existing facilities, by definition, become inadequate. They are simply no longer enough.

In public, Frederick Eaton supported William Mulholland’s plans to relieve Los Angeles’s impending water issue. But Eaton also had a hidden agenda overlaying Mulholland’s. He was careful to keep that one strictly confidential. When finally exposed, it caused Mulholland’s estrangement from Eaton and Eaton’s subsequent disgrace.

Category: UncategorizedBy AOA EditorFebruary 1, 2022
Tags: William Mulholland
ARCHIVED ARTICLES
Go to Top
We use cookies on our website to give you the most relevant experience by remembering your preferences and repeat visits. By clicking “Accept”, you consent to the use of ALL the cookies.
Do not sell my personal information.
Cookie settingsACCEPT
Manage consent