Something to Think About #114 – Rain Shadow by Klarise Yahya 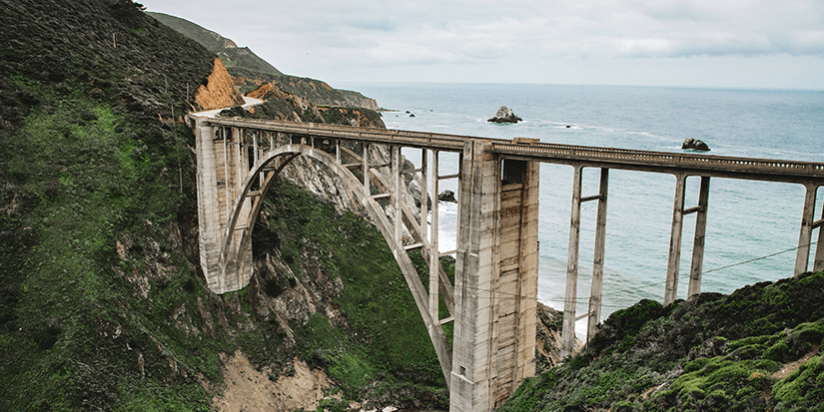 Big Sur and Morro Bay are terribly scenic locations beloved by romantics and those who wish he would become so. They are on the Pacific side of California, cooled in summer by the California Current, which also stabilizes winter temperatures along the coast.

The climate changes as one moves away from the cooling Pacific, either horizontally (moving inland brings hotter summers and colder winters) or vertically (when driving over a mountain range, temperatures are affected by altitude).

The most westerly (nearest the coast) aging and heavily worn mountain ranges, running generally north to south, are collectively referred to as the Coastal Ranges. East (towards New York) of the coastal is the Central Valley. The southern part of the Central Valley is the San Joaquin Valley and, to the north, the Sacramento Valley (together, the Central Valley). These, with their farms and fruit ranches are the agricultural centers of California, where temperatures range from below-freezing on some winter days (good for setting fruit) to triple digits in the high summer months (good for beer sales).

On the other (New York) side of the Central Valley is the high, rugged Sierra Nevada range, with its moderate slope facing west, across the Central Valley towards the Pacific Ocean, and its escarpment overlooking the Great Basin Desert to the northeast and the sere Mojave Desert to the southeast (collectively, the Great Basin Desert). Three National Parks are located in the Sierra Nevada range: Sequoia NP is furthest south, Kings Canyon NP is between Sequoia and Yosemite, and Yosemite NP is the furthest north.

Death Valley is on the eastern (New York) side of the escarpment, about 344 miles from Sequoia NP by the circuitous Mineral King Road. But if one were a hawk, the straight-line distance is only 91 miles. That is possibly worth a moment’s reflection, for it illustrates how suddenly the rain shadow can appear: in this case, little more than an hour’s drive from Sequoia National Park’s Lodgepole Visitor Center (elevation: 6,700 feet, annual precipitation: 43 inches) to Badwater Basin in Yosemite Valley (elevation: minus 282 feet, annual precipitation: 0.24 inches).

Moist heavy air, moving from west (Pacific Ocean) to east (the Great Basin Deserts) rises on the approaching slopes of the intervening mountains (in this case, initially the Coastal Range, and on the other side of the Central Valley, the Sierra Nevada Range). Moist air slides up the mountain slopes, cooling as it does so. Colder air holds less moisture than warm air, thus the moisture

(or a portion thereof) held within the cloud condenses and falls upon the approaching slopes.

This leaves less moisture to fall on the valley side as rain or snow.

How much rain falls is influenced by how high the mountain is. Low mountains (Coastal Range) precipitate less moisture from the clouds than higher mountains (Sierra Nevada Range). That is why the San Joaquin Valley receives rain even though the clouds have already dropped a portion of their moisture on the western slopes of the (low) Coastal Range. It is why the western slopes of the Sierra Nevada’s have abundant water, although Owens Valley, on the eastern side of the crest, is distinctly arid. Briefly, a rain shadow burdens the land downwind (leeward) of a mountain range.

Sometimes rain shadows can be relatively small, such as the referenced Owens Valley. Sometimes they can be bigger: the compounding effects of the Sierra Nevada range and the Rocky Mountains results in the land being rain-shadowed from the California-Nevada border easterly to a line from Austin, Texas north through Lincoln, Nebraska. That is very nearly half the country.

Rain shadow on that side means heavy rain on this side. The Sierra Nevada Range, generally running north-ish to south-ish, creates a rain shadow to the east (the New York side). The mountain’s westerly slopes (facing the Pacific Ocean), however, get significant rain as the clouds rise from the Central Valley and are cooled as they approach the crest of the Sierra Nevada range.

Cooling clouds are accompanied by dropping water. That precipitation (snow in winter, rain in spring) strikes the western slope and flows downhill, gathering first in rivulets, then creeks and streams, and eventually into the Owens River, which historically fed the Owens Lake. Much more water was collected than used, as evidenced by the fact that prior to the Los Angeles Aqueduct the lake was (roughly) 12 miles long, as wide as 8 miles, and fluctuating between 20 to 45 feet deep. The water used, whether for agriculture or personal use, was routinely replenished in late spring and early summer by melting snowpack.

The lake essentially refilled itself. It had been there forever, or at least close enough that you could not live on the difference. It is improbable that the residents of Owens Valley gave much thought to the idea that it might, one day, be gone.

That was the bucolic scene when William Mulholland and Frederick Eaton realized that most of the snowmelt from the Sierra Nevada’s was never used by man: the water was, from Mulholland and Eaton’s point of view, wasted. And Los Angeles was increasingly desperate. If they could move water from the Godforsaken Owens Valley to thirsty Los Angeles, they would be heroes.

But there are people who would criticize ice cream on July 4th, so even heroes must prepare to justify their actions.  Mulholland and Eaton found their philosophical authority in utilitarianism, the moral system advanced by the Englishman Jeremy Bentham (1748-1832), the essence of which is “The greatest good for the greatest number.” Michael Shermer discussed the ethos of utilitarianism in the May 1, 2018, issue of Scientific American. In doing so he presented two examples that exposed the fragility of the concept: Shermer wrote that “Modern utilitarianism is instantiated in the famous trolley thought experiment: You are standing next to a fork in a trolley track and a switch to divert a trolley car that is about to kill five workers, unless you throw the switch and divert the trolley down a side track where it will kill one worker. Most people say that they would throw the switch – kill one to save five. The problem with utilitarianism is evidenced by the follow-up thought experiment: You are a physician with five dying patients and one healthy person in the waiting room. Would you harvest the organs of the one to save the five?”  Shermer continued, “If you answered yes, you might be a psychopathic murderer.”

Conflict with Inyo County over Owens River water rose to visibility in 1902, but it wasn’t until three years later (1905) that Los Angeles formalized its claims. That was also the year Los Angeles began construction on the 230-mile aqueduct, designed to provide 400% of the water the city then required. The first water from the aqueduct arrived in Los Angeles in 1913. By 1920 city population reached 577,000. Ten years later it had doubled to 1,200,000. Fortunes were made simply by developing and flipping raw land, particularly in the San Fernando Valley.

Los Angeles appeared to recognize that its claims to Owens River water were vulnerable, for the City began to purchase land simply for the accompanied water rights. The water was forwarded to Los Angeles. The land itself was of small value because it was now too dry to be profitably farmed. Such land was leased for whatever it could bring, and most lessees converted to a less water-intensive use, such as cattle grazing.

The water that was used to irrigate those 51,000 acres of former cropland was sent to Los Angeles. The loss made the locals peevish enough to dynamite the aqueduct 17 times. The newspapers called it a “war” and circulation improved.

The Water Education Foundation, a source for this article, has noted that Los Angeles currently controls “nearly all the land on the valley floor”. Valley water provided up to 75% of the city’s annual supply until subsequent court decisions reduced the amount of exported water. After years of legal battles, Inyo County and the city of Los Angeles came to an agreement in 1991 to jointly manage the valley’s water resources and regulate the amount of exported water based on environmental effects.

As an example of environmental effects, by 2013 the desiccated Owens Lake had become the largest single source of dust pollution in the United States.  In remediation, Los Angeles Water & Power declared that it planned to stop diverting about 100,000 acre-feet from the Los Angeles allotment of water. Under the plan the water agency would switch to waterless dust control (e.g., rock and gravel cover).

Sidebar: For more than a century, the LADWP has been a creature of its time. The link between then and now has been largely through the concept of utilitarianism: the greatest good for the greatest number. While that is obviously an ethical concept as much as it is a political, it remains the philosophy that fills elected offices. In the early 1900s the utilitarian challenge was to transport water from the Owens Valley for the benefit of a thirsty Los Angeles. Then environmental interests were folded into the cost-benefit calculus and the task shifted towards dust (particulate) remediation.  The water company stood up when called upon and spent / is spending shocking amounts of money to improve the air quality of Owens Valley, so far, a total of approximately $1 billion over an extended period. Best estimates suggest that remediation will require another billion dollars before environmental goals are reached.

To complicate matters, it was not only the city interested in Owens River water. The U.S. Reclamation Service was already at work. Skulduggery, including misrepresentation, was pending.  More, later.

Category: UncategorizedBy AOA EditorMarch 1, 2022
Tags: Mulhollandwater
ARCHIVED ARTICLES
Go to Top
We use cookies on our website to give you the most relevant experience by remembering your preferences and repeat visits. By clicking “Accept”, you consent to the use of ALL the cookies.
Do not sell my personal information.
Cookie settingsACCEPT
Manage consent