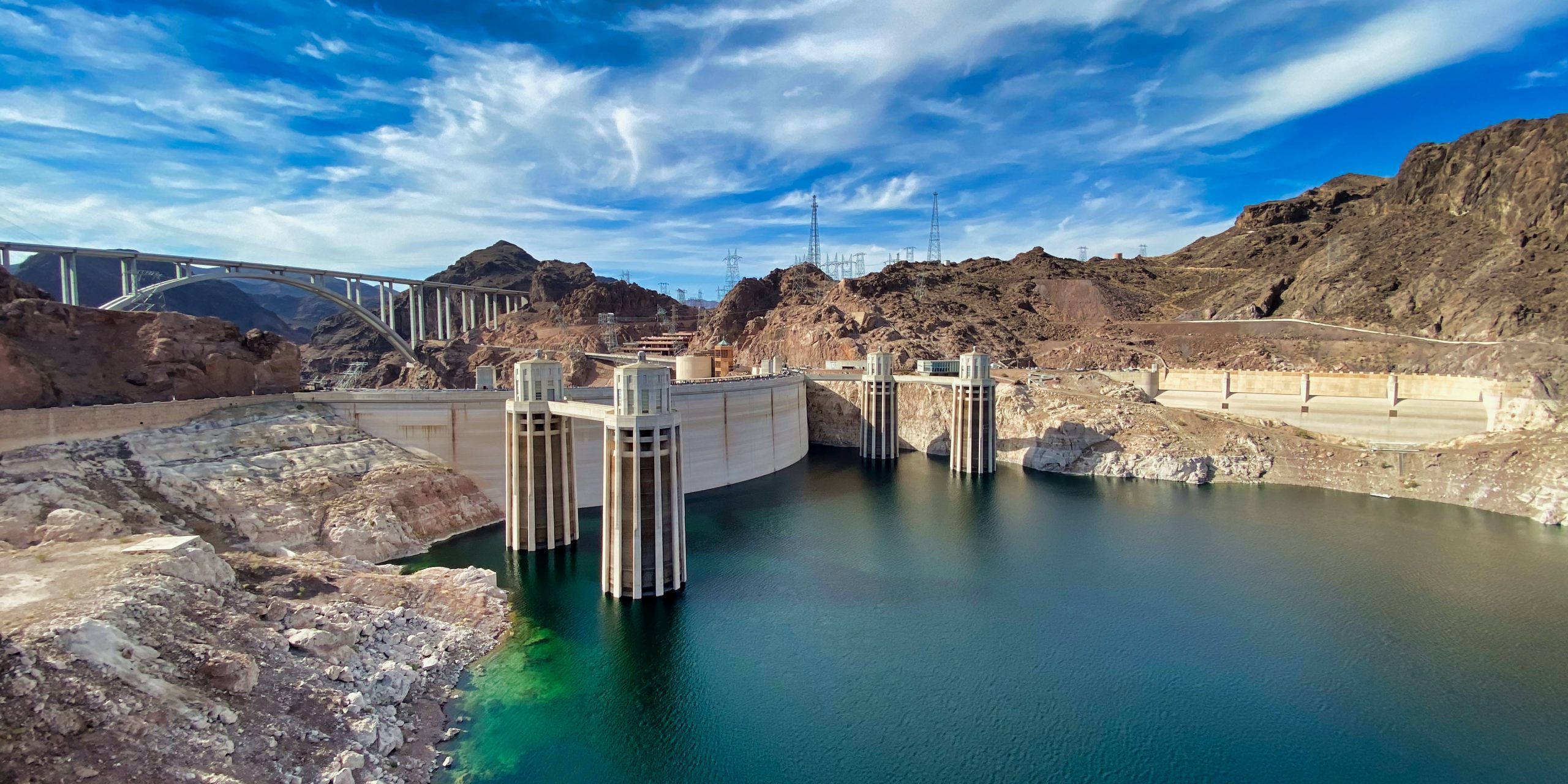 Continued . . . These were the circumstances under which Henry J. assumed control of his paving company. The economics were splendid: better cars meant more driving which increased the demand for improved roads, which Congress was soon to fund to increase employment during the Depression. This recipe for wealth, wherein supply creates its own demand, has been seen more recently in computers and mobile telephones.  For Henry J., it was a beginning.

Congress funded not only roadways, but also basic infrastructure in general. For the next 15 years or so Henry J. built dams in California, levees along the Mississippi River, 500 bridges and 200 miles of highway in Cuba. One thing these contracts had in common, besides being funded by various governments, was the need for abundant sand and gravel.

Sand and gravel are cheap to buy, but shockingly expensive to move. Most contractors simply put their sand and gravel requirements out to bid and accepted the lowest offer that included delivery. Henry J. established his own sand and gravel plants convenient to the construction site. By supplying his own material, he could underbid competing contracts by the amount saved on shipping, with no erosion to his margins.

But eventually companies reach an inflection point: they have outgrown their present customers but aren’t yet large enough to compete at a higher level. Henry J. reached that stage in the late 1920’s. His company had grown enough that levees and highway bridges no longer moved the needle, yet he wasn’t quite big enough to ascend to the next higher tier. His company was in a transition period. Many companies fail at this point. An example was the Canadian company that Henry J. purchased in bankruptcy and renamed after himself.

Henry J. adapted by bidding for large contracts he knew he was not yet positioned to complete, then sub-contracting out the parts he didn’t want or couldn’t handle. At other times he would bid to be a sub-contractor on some other company’s contract.

Then came the Depression (1929 – 1945). The Dow Jones hit 381.17 in September, 1929. That was its “Roaring Twenties” high. Then the economy collapsed over the next three years to a Dow Jones bottom of 41.22. That reflected an 89% drop. A person that had $100,000 invested at the market high saw his capital erode to $11,000 thirty-five months later. Since the stock market is related to the economy, one can only shudder at the effect on employment of an 89% collapse. We’ve all seen the photographs of Depression Era soup lines. In support of the economy, the federal government sought to generate employment through massive infrastructural development. That was a boon to Henry J. After a decade-and-a-half of building government sponsored roads, levees, bridges (including the San Francisco – Oakland Bay bridge), and dams, threading his way through government contracts was something with which he was quite familiar.

One of the first early national mega-developments was the construction of the Hoover Dam. Bid documents stipulated that the government would provide the materials and the contractor (singular) would be responsible for preparing the site and to construct the dam. Interestingly, the Bureau of Reclamation required this huge contract to be completed by a single company.

The bid documents were described in detail. There were 100 pages of narrative accompanied by 76 technical drawings. A bid bond of $2 million ($39 million in now-money) was required with every bid. Additionally, the company selected would be required to post a $5 million performance bond ($97.5 million in now-money).

This was a complicated project. It was the first dam on the Colorado River, and no single contractor had the resources to make a qualified bid alone . . . but a group could. And if the group joined to create a company specifically for this project, then the contracting company would be considered a single legal entity. In February, 1930, a group of six companies was incorporated as a joint venture called, naturally enough, “Six Companies, Inc.” The Henry J. Kaiser Co. held 30% of the joint venture.

As one would expect, employment fluctuated as the various phases of construction were completed. Peak employment occurred in July,1934, with 5,251 people on the payroll. Most of these were laborers, but others were specialty workers, with some being highly skilled. One subset of specialty workers dealt with the friable rock walls. The canyon where the dam was being built had been exposed to the elements for geological ages, long enough that its rock sides had become subject to crumbling.

In dam building, concrete is forced against rock under pressure. Then the judicious employment of a suitable grout results in a waterproof seal. A necessary predicate, for waterproofness to occur, is that it is imperative that the concrete adheres to bedrock. If it doesn’t, if concrete is mud-slapped against easily broken sedimentary rock, the strength of the bond will be determined not by the concrete, but of the friable sedimentary deposits. Oh-oh.

The skilled men who removed deposits of soft rock, right town to bedrock, were known as scalers. Some of the lesser skilled scalers would work at removing sedimentary rock from the canyon floor. These floor-scalers came largely from the common laborer class. It was an entry level position.

But there were also those who abseiled from cliffs to prepare canyon walls to receive the concrete pour. This was highly skilled work, and those who did it were referred to as high-scalers. They were almost exclusively Apache.

The high-scalers hung from ropes in temperatures often exceeding 100*F and carefully prepared the surface of the canyon wall with jackhammers and dynamite. It was spicy work, and the most common cause of death was falling objects. One time the falling object was said to have been a government inspector who lost his grip on a safety line. He began tumbling down a slope to his nearly certain death when a high-scaler was able to intercept him and pull him to safety. It makes one think of trapeze artists, the aerialist and the catcher. From that afternoon on, high-scalers became tourist magnets and high-scalers developed into great showoffs. One worker was nicknamed the “Human Pendulum” for swinging objects, sometimes co-workers and other times cases of dynamite, across the canyon.

The frequency of falling rocks caused the Apache high-scalers to improvise safety equipment. The (possibly apocryphal) story is that they would buy cloth hats, dip them in heated tar, and allow them to harden. It was said that a worker wearing such headgear could be struck hard enough to break his jaw yet sustain no skull damage. Six Companies ordered thousands of what were initially called “hard boiled hats” (later, “hard hats”) and strongly encouraged their use.

What makes this story dubious is what comes after carefully fitting a cap, saturated with hot tar, on one’s head. How exactly do you get it off? But it makes a good story.

The Hoover Dam project was so large and complex that the Bureau of Reclamation received only three bids. “Six Companies” was the low bidder at $48,890,955 (now money: $782,000,000) and was awarded the contract.

Rock, even bedrock, cannot be assumed to be free of voids. Cavities are managed by first removing the sedimentary rock, then driving contiguous holes into the canyon walls and beneath the footprint of the dam. Cavities discovered would be filled with a water-impermeable polymer grout. A series of grout filled rock cavities is called a “grout curtain”. When properly done, this corrects for seepage beneath the base of the dam and can be done during or after construction. It is not uncommon.

Every reasonable effort was made to complete Hoover Dam during the bonus period, when incentives would be paid for early completion. To motivate the men working on the grout curtain, concrete pours were scheduled before the curtain was finished. This was supposed to put significant pressure on those workers who were responsible to find and fill voids in the bedrock.

Prescheduling grout pours was intended to make the laborers work faster. But there is a limit. When they found voids or hot springs too big to readily fill in a timely manner, the workers simply moved on without resolving the problem(s). Of the 393 holes sunk, 58 were incompletely filled, and required corrective action. The work was done in relative secrecy in the nine years between 1939 and 1947.

The dam was dedicated in 1935, two years ahead of schedule. Bonuses were awarded.

Note to the Reader:  This article is largely sourced from the Wikipedia entry on Henry J. Kaiser.  Additional sources include Stefanie Pettit’s May 11, 2016, article in the Spokesman-Review and the article in Dozr.com

Category: UncategorizedBy Israel PeredaNovember 1, 2022
ARCHIVED ARTICLES
Go to Top
We use cookies on our website to give you the most relevant experience by remembering your preferences and repeat visits. By clicking “Accept”, you consent to the use of ALL the cookies.
Do not sell my personal information.
Cookie settingsACCEPT
Manage consent