The Destructive Power of Rent Control By James Burling

Bomb damage or rent control? That was the caption under this picture in a 1981 book about rent control across the world. Looking at the photo, it’s impossible to tell the difference. Almost 40 years later, the story hasn’t changed: outside of wars and natural disasters, rent control is the single most effective destroyer of property and property rights. And yet, in an expression of majoritarian short-sightedness in urban areas, its popularity remains unabated.

Pacific Legal Foundation, (PLF), has been fighting rent control since our founding because there is no legal, economic, or moral case for this insidious policy. 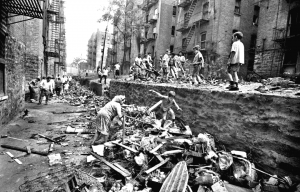 All economists who study rent control conclude it is counterproductive. A few years ago, PLF compared rent-controlled communities with neighboring towns that had a free market. We wanted to see whether rent control actually achieved the laws’ stated purpose of helping minority and other economically and socially disadvantaged populations. Without exception, every rent-controlled community had fewer poor and minority residents—that is, the very people the law was designed to help.

Study after study shows wealthier and more educated people are better positioned to take advantage of rent control’s guarantee of below market rates. That’s because these populations have the stability to stay in one place for longer periods of time.

Why? Because when landlords cannot recoup significant investments in upkeep and improvement, most will only do what is required to maintain habitability. When that gets too expensive, landlords will abandon their buildings. And forget about developers building enough new units in rent-controlled cities.

There is no economic justification for rent control. Rent control cannot repeal the law of supply and demand in cities, which means higher housing costs that ultimately make it impossible for working and middle-class families to live there. When rent control in major cities is combined with the “keep-it-out-of-my-neighborhood” NIMBYism writ large, we see the result: wretched tent cities filled with the victims of bad policy choices.

With renewed vigor, PLF will continue its fight and look for new and innovative opportunities to take to the Supreme Court.

James Burling is Vice President of Legal Affairs for the Pacific Legal Foundation. He has written extensively on all aspects of property rights and environmental law and frequently speaks on these subjects throughout the nation. Pacific Legal Foundation (PLF), is a national nonprofit legal organization that defends Americans threatened by government overreach and abuse. Founded in 1973, PLF challenges the government when it violates individual liberty and constitutional rights. With active cases in 39 states plus Washington, D.C., PLF represents clients in state and federal courts, with 12 victories out of 14 cases heard by the U.S. Supreme Court. For more information, visit www.pacificlegal.org. Reprinted here with permission from Pacific Legal Foundation.

Category: UncategorizedBy AOA EditorMarch 1, 2022
Tags: Destroyer of Property rightsJames BurlingRent Control
ARCHIVED ARTICLES
Go to Top
We use cookies on our website to give you the most relevant experience by remembering your preferences and repeat visits. By clicking “Accept”, you consent to the use of ALL the cookies.
Do not sell my personal information.
Cookie settingsACCEPT
Manage consent