According to the IMF, the global economy was growing at a healthy rate of just over 4% in the first half of 2018. However, recent estimates from Bloomberg and some multinational banks suggest that global growth contracted significantly in the second half of last year to only 2 – 2.5%. If so, that would mean growth slowed to the lowest level since 2008-09 during the Great Recession.

On January 21, the IMF revised its global economic growth forecast for 2019 down to 3.5%, citing concerns about rising trade tariffs between the U.S. and China and weakening in the European economy in the last half of 2018. It will not surprise me if the IMF cuts its global growth forecast more just ahead.

Here’s why: If global growth was in fact 4.1% in the first half of 2018 as the IMF believes, and if it did slow to only 2 – 2.5% in the second half of last year, that’s still average growth of over 3% for the year. But if growth did slow to near 2-2.5% in the second half of last year, that will mean there will have to be a substantial rebound to come anywhere near the IMF’s global growth forecast of 3.5% for 2019.

I could go on with specific economic reports that suggest the slowdown in the global economy is continuing this year, but the following chart illustrates what’s happening in the trend globally. It shows that economic growth is trending lower; it does not mean that growth is negative. 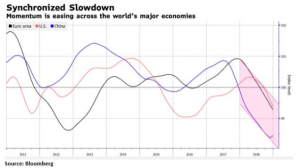 Take the U.S. for example, which had nearly 3% growth last year, the best in a long time. Yet, U.S. GDP peaked in the second quarter at 4.2% and slipped to 3.4% in the third quarter and 2.6% in the fourth quarter. So while it was a great year overall, momentum was slipping in the second half of the year. The same was true in Europe and China.

According to the IMF, advanced economies have been on a declining path in terms of growth and this is taking place more rapidly than previously thought. These countries are forecast to grow only 2% this year and 1.7% in 2020. At the same time, there’s also been a growth slowdown in emerging economies. The IMF projects a 4.5% growth rate in 2019 in emerging countries, down from 4.6% in 2018. But this could change as I’ll discuss below.

In its latest report on January 21, the IMF warned that several factors, if they occur, could slow global growth even more this year: “A range of triggers beyond escalating trade tensions could spark a further deterioration in risk sentiment with adverse growth implications, especially given high levels of public and private debt.”

Chief among the IMF’s concerns is the growing likelihood of a “no deal” Brexit for the United Kingdom. The problem is there is no deal in place to manage the UK’s relationship with the 27 countries in the European Union after Brexit, which was set to happen on March 29th.

Britain’s Prime Minister Theresa May has put forth several proposals to deal with trade between the UK and the EU countries beyond Brexit, but each proposed deal has been roundly shot down by Parliament. Britain’s Parliament is deeply divided over what Brexit should look like, or whether it should happen at all.

Brexit with a deal: Parliament approves a deal that the EU can live with, and the departure takes place in a reasonably orderly way.

Brexit with no deal: If Parliament doesn’t make a deal with the EU, then the UK was still set to leave on March 29th, but in a chaotic fashion. There were projections of shortages of pharmaceuticals and other essential goods in the UK if no deal was reached. Now that the deadline has been extended, it is impossible to know what will happen just ahead.

Of course, there is a third option: There is a legal mechanism for the UK to call the whole thing off. Politically, this would almost certainly require another referendum or an upheaval in Parliament, but it’s not out of the question.

I don’t pretend to know what will happen. The EU is pressing hard for another Brexit vote and might be willing to give Britain more time, since it believes a new Brexit vote would fail (UK stays in the EU). Prime Minister May doesn’t want a second vote for the same reasons – she wants out.

We are told that if the UK departs the EU with no deal, the so-called “hard Brexit,” it will cause chaos in the global markets. No doubt it could cause some short-term volatility. But keep in mind that the UK’s economy is only the size of California. Thus, it should not be a really big deal no matter what the UK decides to do.

[Note:  Brexit is short for “British exit” – and is the word people use to talk about the United Kingdom’s decision to leave the EU (European Union). The EU is a political and economic union of 28 countries which trade with each other and allow citizens to move easily between the countries to live and work.]

Economists: Worst May Be Over for Global Economy

I’m not so sure, but I’ll give you their thinking. Bloomberg’s Chief Economist, Tom Orlik said last week: “Put the Federal Reserve pause, trade truce, and China stimulus together and we’re looking for a trough in the first quarter and very moderate pick up ahead.”

Obviously, those are some optimistic assumptions. Just because the Fed said it can be “patient,” that does not mean there won’t be an interest rate hike this year. It remains to be seen if we’ll get a trade deal done with China. Likewise, it remains to be seen if China’s economy will rebound this year – ditto for the EU economy.

Orlik is correct that the Fed and many central banks have either held back on raising interest rates or introduced fresh stimulus in an effort to reverse the global slowdown. European Central Bank President Mario Draghi has ruled out rate hikes this year and unveiled a new batch of cheap loans for banks to stimulate the EU economy.

Elsewhere, authorities in Australia, Canada and the UK are among those to have adopted a wait-and-see approach on monetary policy. China, at its National People’s Congress this month, signaled a willingness to ease monetary and fiscal policies to support expansion.

Investors have clearly become more optimistic in the wake of the December stock market correction, and this has pushed equity prices significantly higher this year. The S&P 500 has gained almost 20% from its December low, while the Shanghai Composite is up about 22%. 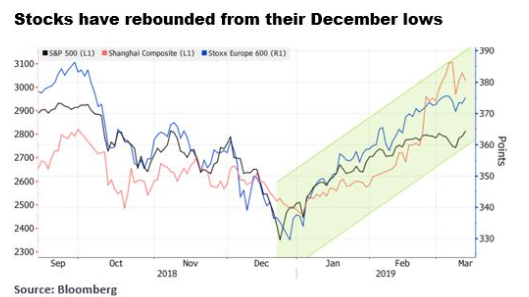 While I may not be as confident about the global economy rebounding as these and other forecasters are, signs of a turnaround before long are slowly increasing. I think part of this new optimism is the fact that most forecasters have given up on the view that the US is going into a recession this year. You remember that one, right? Now most forecasters suggest we’re safe from a recession until next year. Hum, where have we heard that before?

Category: UncategorizedBy AOA EditorMay 1, 2019
Tags: AOAgaryhalbertGlobaleconomy
Go to Top
We use cookies on our website to give you the most relevant experience by remembering your preferences and repeat visits. By clicking “Accept”, you consent to the use of ALL the cookies.
Do not sell my personal information.
Cookie settingsACCEPT
Manage consent