Inflation in April accelerated at its fastest pace in more than 12 years as the U.S. economic recovery kicked into gear and energy prices jumped higher, the Labor Department reported in April.

The Consumer Price Index, which measures a basket of goods as well as energy and housing costs, rose at a rate of 4.2% from a year earlier. That figure was more than double the sub-2% level where inflation has been running for several years, and was well above the highest pre-report estimate by economists and forecasters. 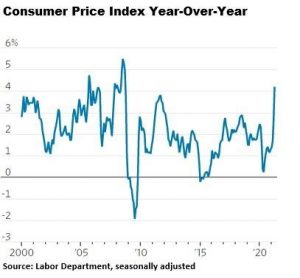 The increase in the annual headline CPI rate was the fastest since September 2008, while the monthly gain in core inflation was the largest since 1981.

Used car and truck prices, which are seen as a key inflation indicator, surged 21% this year, including a 10% increase in April alone. Car and truck rental prices soared 82% since this time last year. Shelter (housing), another key inflation component, was up 2.1% year over year.

Energy prices overall jumped 25% from a year earlier, including a 49.6% increase for gasoline and 37.3% for fuel oil. This spike occurred even though most energy categories saw a decline in April.

Prices at the pump, which fell 1.4% in April, have resumed their climb in May, with the national average eclipsing $3 a gallon for the first time since November 2014, according to AAA. Further rises are likely from the recent cyberattack which shut down Colonial Pipeline’s main transmission line from Houston to New Jersey.

April Inflation Jump Was More Than the “Calendar Effect”

We have known that the annual inflation rate was going to rise because inflation plunged lower during the COVID-19 recession last spring. Last year’s depressed March and April CPI numbers have now rolled off the 12-month calendar window and replaced with higher figures, thus causing the annual rate to increase.

Price surges also have come amid supply bottlenecks caused by a number of factors, from production issues with the ubiquitous semiconductors found in electronics products to the Suez Canal blockage in March to soaring demand for a variety of commodities.

Lumber prices alone have risen 124% in 2021 amid persistent demand for building materials. Copper, often seen as a proxy for economic activity, has jumped nearly 36%.

Policymakers are watching April’s CPI reading to gauge the extent of what many expect to be a months-long rise in prices, after a year of anemic overall inflation as the pandemic curbed consumer spending. Whether an upswing in prices proves temporary is a key question for financial markets and the U.S. recovery, as the Biden administration, Congress and the Fed continue to support the economy with fiscal and monetary stimulus measures.

The Fed continues to say it expects the inflation pickup to be “transitory,” and a top official last week after the report said the central bank would need to see more data before changing course on monetary policy.

The Fed has consistently said it would hold short rates near zero until the central bank’s preferred inflation measure is averaging at least 2% and full employment has been achieved. A persistent, significant increase in inflation could prompt the central bank to tighten its easy-money policies earlier than planned, or to react more aggressively later, to achieve its 2% inflation goal.

Economists surveyed by The Wall Street Journal recently forecast the second quarter to grow at an annual rate of 8.1%, putting the U.S. economy on track for its strongest year since the early 1980s. In that environment, it is not surprising that inflation is rising significantly. The only question now is whether it is temporary or not. Time will tell.

Surveys consistently show most Americans agree there is a U.S. border crisis in states like Texas, California and Arizona. The number of illegal immigrants coming into the country are off the charts. Yet President Biden refuses to call the dilemma a “crisis” and refuses to visit the border to see for himself.

Last Friday, President Biden’s Press Secretary, Jen Psaki, finally attempted to address the issue and said the president has not visited the southern border because there is reportedly “low public interest” in the matter. She added:

Wow, that may be one of the worst answers I’ve ever heard from a sitting president!

The overall numbers are hard to ascertain but it is widely agreed that many of the illegal immigrants are infected with the coronavirus. Nevertheless, they are loaded onto buses and other transportation and shipped all across America to their final destinations.

According to the latest Pew Research Center survey, more than two-thirds of Americans say the Biden administration is doing a “very” or “somewhat bad” job handling the illegal immigration crisis at the southern border. Psaki says the media is hyping the problem.

For the President of the United States to say there is no crisis at the border and refuse to go firsthand to see what can be done to stop it – because he says (falsely) that the public doesn’t care – is unthinkable and unforgivable!

FYI, I would say exactly the same thing if it were any other president doing this.

Category: UncategorizedBy AOA EditorJuly 1, 2021
Tags: Gary D. HalbertU.S. Inflation
ARCHIVED ARTICLES
Go to Top
We use cookies on our website to give you the most relevant experience by remembering your preferences and repeat visits. By clicking “Accept”, you consent to the use of ALL the cookies.
Do not sell my personal information.
Cookie settingsACCEPT
Manage consent