U.S. Inflation Has Been Below Fed’s Target For Years By-Gary D. Halbert

To begin this discussion, let’s take a look at the U.S. inflation rate. The most-cited inflation measure is the Consumer Price Index (CPI). The CPI has been running around 2% or below since mid-2012. As you can see below, the CPI dipped to near zero in June of this year before rebounding modestly in July. For the 12 months ended in July, the CPI rose only 1.0% 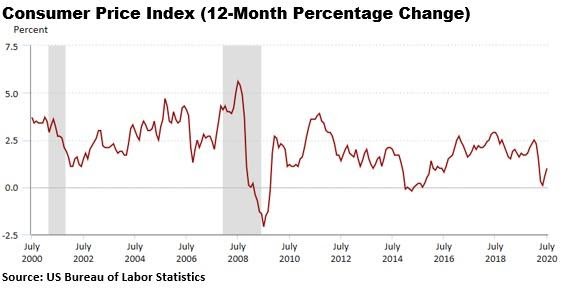 This low rate of inflation may seem counter-intuitive to many of us because we all see food prices rising steadily at the grocery store seemingly every month. And it’s true – food prices are rising significantly more than the CPI would suggest. But we have to keep in mind that the CPI includes many other price determinants, including utilities, housing, education, apparel, transportation, medical costs and energy, just to name a few.
While the cost of food has been rising by much more than 1% a year, energy prices have fallen much more than food prices have risen in recent years, thus keeping the overall Index low. The CPI minus food and energy, the so-called “core” CPI, rose 1.6% over the 12 months ended July.
The Fed’s favorite inflation measure is the Personal Consumption Expenditures Index (PCE) published by the US Bureau of Economic Analysis (BEA). The core PCE has also been running below the Fed’s inflation target of 2% for more than a decade, as you can see below. 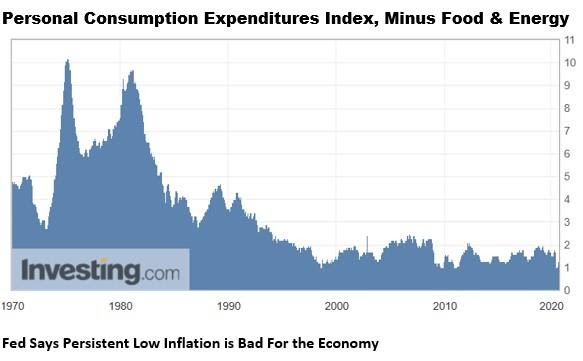 In the past, the Fed has simply tolerated inflation running below its long-stated goal of 2%. However, in his keynote speech for the latest symposium, Chairman Powell signaled the Fed will now be taking more overt measures to lift the inflation rate to 2% or even higher. This is new ground for the Fed.
Also new was Mr. Powell’s argument that persistently low inflation is bad for the economy. Persistently low inflation, he said, “can lead to an unwelcome fall in longer-term inflation expectations, which, in turn, can pull actual inflation even lower, resulting in an adverse cycle of ever-lower inflation and inflation expectations.”
Translated, the above quote means the Fed is scared that low inflation could lead to deflation (i.e. – falling prices), which the Fed is seriously afraid of. They just don’t say so directly.
Another unstated reason the Fed wants higher inflation is so it can ultimately raise interest rates several times, so it has room to cut them again when the next recession arrives.
We have not heard this latest higher inflation argument from the Fed before. Powell said, going forward, the Fed will undertake “appropriate monetary policy” which will aim to achieve 2% inflation or even moderately above that level for however long it is needed.
While Powell said the Fed would like to see inflation moderately above 2%, he offered no indication how much higher that might be. Later in the same day, however, Dallas Federal Reserve Bank President Robert Kaplan said the Fed would be content with 2.25% to 2.5%.
One pledge Powell made in his remarks last week was not to raise interest rates until inflation, as measured by core PCE, hits at least 2%. That pledge made Fed-watchers assume the central bank is prepared to keep the Fed Funds rate at zero-bound for several years, if necessary.
Unfortunately, the Fed Chairman offered no other details on what monetary policies or actions it might take in its effort to boost inflation. The Fed Funds rate is already near zero, and Mr. Powell has made it clear on multiple occasions this year that the Fed is unwilling to consider negative interest rates, as Europe and Japan have done.
The other way the Fed has historically tried to stimulate the economy is by printing lots of money, which often leads to higher inflation. Yet so far this year, the Fed has already created an unprecedented $3 trillion in new money which was used to buy Treasuries, mortgage-backed securities and other assets – thus boosting its balance sheet to a historic $7 trillion.
Yet so far, inflation shows no signs of moving meaningfully higher. Yes, gold has soared to new record highs this year, but as I argued in August, I believe the spike in gold has been almost entirely driven by the COVID-19 pandemic and a flight to safety, much more so than fears of inflation.

Why It Will Take More Than the Fed to Lift Inflation
The bottom line is it’s not the least bit clear what the Fed can do to boost inflation from 1% over the past year to 2% or even higher. Most economists agree that low inflation is largely the result of the ongoing wave of technological advances which generally make goods and services cheaper to produce and deliver over time, and this is not expected to change anytime soon.
Granted, we’ve seen unprecedented spending by the federal government this year, along with massive money printing and asset purchases by the Fed. But so far inflation is not showing signs of a significant increase just ahead.
Maybe it will happen at some point. Maybe Congress will come back from recess and pass yet another huge stimulus bill, one that would lavish more large cash payments on families which qualify. If it passes, maybe that will be enough to spark some inflation, we’ll see. I just don’t believe the Fed is in a position to accomplish its goal on its own.
Finally, I believe the most likely event to spark significantly higher inflation would be the election of Joe Biden in November. The left-wing of the Democratic Party is clearly driving Mr. Biden’s agenda, and this includes huge increases in spending if he gets in office (even more than President Trump has done).
One of the main policies the left-wing Dems want is a “Universal Basic Income” for all but upper income Americans. Universal Basic Income (UBI) is a social-welfare system which guarantees all citizens or families who qualify an income sufficient to live on.
While I have not seen specific estimates on what UBI would cost, most analysts agree it would be at least several trillions of dollars a year. If implemented, that would mean income taxes would have to increase by far more than Mr. Biden currently proposes. It would also likely mean the implementation of a “Value-Added Tax” which would affect everyone.
Never mind that UBI hasn’t worked in the countries where it’s been tried. But if implemented here, it would almost certainly result in significantly higher inflation. Just saying …

Category: UncategorizedBy AOA EditorOctober 1, 2020
Tags: CPIGary D. HalbertU.S. Inflation
Go to Top
We use cookies on our website to give you the most relevant experience by remembering your preferences and repeat visits. By clicking “Accept”, you consent to the use of ALL the cookies.
Do not sell my personal information.
Cookie settingsACCEPT
Manage consent