Each year after filing your tax return you may wonder if there might have been something else you could have done to reduce your income taxes. As the owner of multi-family rental real estate, you may be missing out on significant income tax benefits if you have not considered taking accelerated depreciation on your property.

Cost segregation is the IRS-recognized method of taking accelerated depreciation on depreciable real estate and is used by savvy property owners to maximize their cash flow from their investments. If you haven’t looked into cost segregation, it may not be too late, as it can be applied both at time of acquisition or potentially years later, on a retroactive basis, with good outcomes.

Owners of commercial property (with 39-year depreciation lives) and apartments (27.5 years) may have cost segregation studies performed to determine which of the many components of their property improvements fit the IRS-defined categories for faster depreciation. Cost segregation studies also establish how much of the overall initial cost of your property (net of land) may be allocated to each qualifying item, enabling you to set up (or revise) your depreciation schedule to take advantage of the findings of a study.

Cost segregation establishes shorter depreciation lives for the “segregated” assets. Additionally, five-year personal property qualifies for what accountants call double-declining balance depreciation, and fifteen-year property is also accelerated, using the 150% declining balance method, both of which speed up the recognition of depreciation expense for tax purposes. The combined effect can be a very sizable increase in depreciation expense in the first few years after cost segregation is applied, and a corresponding reduction in income tax.

What Qualifies for Accelerated Depreciation?

Typically, somewhere between 20% and 40% of the initial cost basis of apartment properties will qualify for short-term depreciation, depending upon the nature of the improvements.

Items that qualify for reclassification as five-year personal property include, but are not limited to, carpeting, some wall treatments, signs, security systems, some cabinetry and countertops, accent lighting, decorative millwork, mirrors, appliances, site lighting, fire suppression systems, deck railings. There could be dozens of additional items depending on the property.

The graph below illustrates the effect of cost segregation on a hypothetical apartment property with an initial cost basis (net of land cost) of $5 million, placed in service on January 1, 2016. We will make the conservative assumptions that 15% of the costs are found through cost segregation to be five-year personal property, and 10% are classified as fifteen-year land improvements. The owner’s marginal tax rate is 40%. 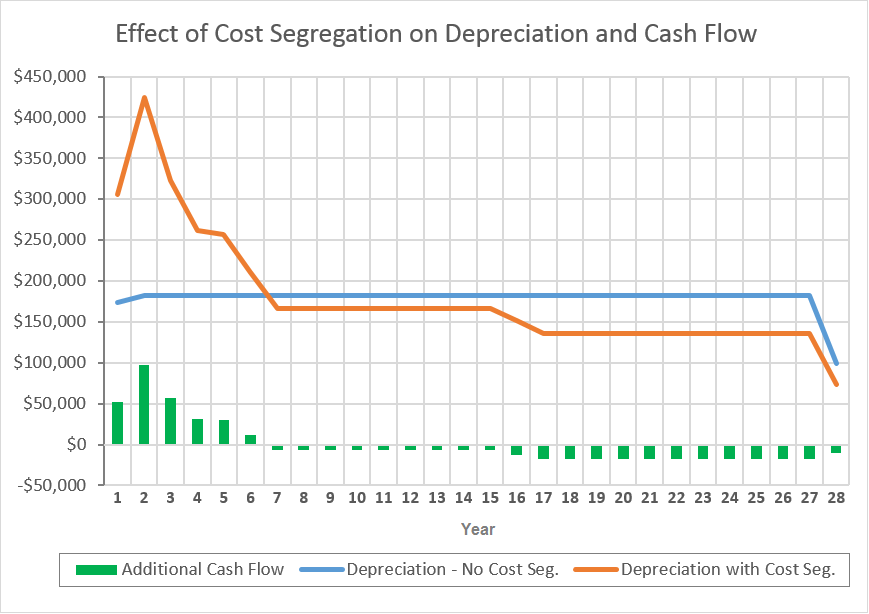 In the above example, the blue line represents the initial straight-line depreciation over 27.5 years. Cost segregation causes depreciation expense to be shifted (orange line) from later years to earlier years.

Additional depreciation expense in earlier years reduces income tax during those years, creating additional after-tax cash flow (the green bars) which may be used for any purpose. In this example, the additional cash flow over the first six years is $279,495.

Note that cost segregation does not create any new or additional depreciation when considering the entire depreciation life of the property – it simply moves much of that expense to earlier years. Considering the value of a dollar today vs. a dollar tomorrow, cost segregation creates value for owners by providing access to more cash flow, earlier.

In the above illustration cost segregation has been applied from the beginning of the period of ownership. While this is the optimal situation, most property owners apply cost segregation when they learn of it, which for some property holdings may be years after acquisition. Cost segregation can be applied retroactively, without any need to amend past tax returns, and the results can be attractive even if a property has been owned for ten to fifteen years, with sufficient initial cost basis.

Doesn’t My Accountant Do This for Me?

Sometimes accountants will be able to classify and book specific costs that they recognize to be eligible for a short depreciation life. If you have your parking lot resurfaced, they probably will add that cost to your depreciation schedule as a fifteen-year land improvement. However, reverse-engineering your entire building (or buildings) is a specialized task that requires detailed knowledge of construction and cost estimation. This is not something that accountants are trained to do, so any cost segregation they may perform will be limited in scope and is likely to yield much lower results than those obtained by engineers who specialize in this field.

This fact is stated in the IRS Audit Techniques Guide for Cost Segregation. This is why cost segregation studies are the domain of specialty firms that possess not only detailed knowledge of the relevant tax laws and regulations but also know how to break down buildings, on paper, according to the expectations of the IRS. A cost segregation firm has the expertise to review any plans, specifications, appraisals, surveys and cost records that are available as well as perform a detailed on-site review of the property to determine what assets exist and what they individually cost. The most reputable providers also will send one of their engineers to defend their study in an audit if called upon to do so.

Why Haven’t I Heard of Cost Segregation?

You might expect your accountant to tell you about cost segregation if you own substantial real estate assets, and some accountants are quite knowledgeable on the subject and do recommend it. However, Federal tax law is exceedingly complex, and no individual can be an expert on all of its many aspects, including the relatively narrow cost segregation niche. Further, cost segregation has changed greatly since it was initially introduced, and many CPAs probably are unaware that it is now more widely applicable than in its early years.

Cost segregation has been in existence since 1997, following a high-profile court case (Hospital Corporation of America vs. Commissioner of Internal Revenue) which set the precedent for depreciating certain assets in buildings as personal property rather than as long-term real property assets. While many accountants now know about cost segregation, they often believe that it only applies to mega-properties because in the early years the studies were non-routine and expensive to perform. The methods used by today’s providers have become much more efficient, so that their services are now available at relatively low cost. Now, even properties with improvements of only $1 million in cost basis may benefit from a study.

When to Have a Cost Segregation Study Done

Having a cost segregation study performed when you build or buy an apartment property can set you up for the maximum tax benefit from your investment right from the beginning. However, as mentioned above, “lookback” studies can be done as on properties that have been owned for two or more years and can produce attractive tax benefits.

There are several other situations in which it is wise to consider having a cost segregation study done on your property:

Is it Worth the Cost?

The cost of study is normally quoted as a fixed fee. Be wary of providers who propose to charge a percentage of tax savings as this practice is frowned upon by the IRS because of the inherent conflict of interest it creates.

It is not unusual to find that the tax benefits obtained in the first 1-5 years from cost segregations are ten or more times the typical fee, and often will be considerably higher for large properties with multi-million-dollar cost bases. This after-tax benefit-to-cost ratio may be even higher when considering that the provider’s fee is a tax-deductible expense in the year the study is performed.

A reputable cost segregation firm will provide a complimentary estimate of your projected shift in depreciation and tax benefit prior to engaging its services, along with a fee quote. You will be able to weigh the costs and expected benefits with this information. The cost segregation firms should prepare its estimates of tax benefit with conservative assumptions so that if there is a surprise it will be a pleasant one. Some cost segregation providers have been in operation for many years and have thousands of cases upon which to base their estimates, enabling them to provide highly accurate projections.

Cost segregation is a tax deferral strategy which can provide you with significantly more cash flow from your investment in apartments or commercial real estate. It is a time-tested method, recognized by the IRS and public accounting firms as a useful strategy for maximizing the tax benefits of real estate. A careful review of your property and your tax situation with your CPA or real estate attorney, in conjunction with a qualified cost segregation provider, can help you determine whether cost segregation is right for you.

Jeff Glass is with Bedford Cost Segregation.  For more information, call (510) 537-9900 or email him at [email protected]

Category: Magazine ArticlesBy AOA of California, INC.May 1, 2016
Go to Top
We use cookies on our website to give you the most relevant experience by remembering your preferences and repeat visits. By clicking “Accept”, you consent to the use of ALL the cookies.
Do not sell my personal information.
Cookie settingsACCEPT
Manage consent